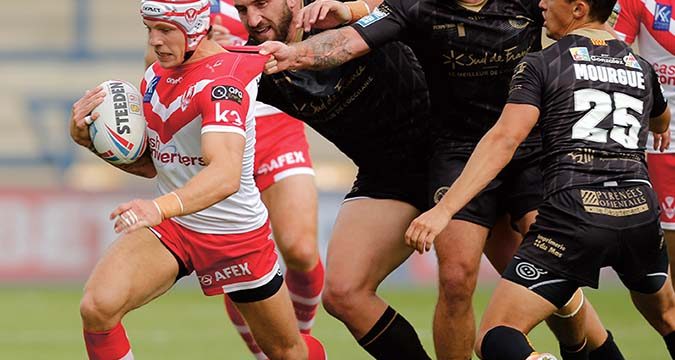 The Rugby Football League has taken steps to ensure that the Catalans Dragons can continue to take part in Super League and the Challenge Cup if, as expected, France is added to the UK’s list of Covid-19 travel restricted countries.

French virus infection figures are climbing steadily and it looks increasingly likely that it will join neighbouring countries Spain, Andorra and Belgium on the list of countries now facing 14-day quarantine restrictions for travellers arriving in Britain.

Any quarantine would have spelled disaster for Super League’s only French club, which is banking on a series of home fixtures to save their season from total collapse.

That would be particularly disappointing for their supporters after their convincing 40-14 victory against Castleford Tigers at Headingley on Saturday, with star signing Israel Folau playing a key role, scoring a try, having three try-assists and earning the award as the Sky Sports man of the match, while also picking up three points in the Albert Goldthorpe Medal table.

“If quarantine had applied, it would have been the end of our season. It would have stopped all travel for teams between the UK and France,” said a Dragons insider.

But officials from the RFL have sought government approval for the sport’s exemption from quarantine.

An RFL spokesman said: “Super League and the Challenge Cup are included in the UK government’s regulations that permit an exemption from quarantine for elite international sports competitions. Players and support staff coming from France would not be subject to a 14-day quarantine.

“The RFL and Super League continue to liaise with Catalans Dragons regarding the position of the French authorities.”

Catalans are already struggling to cope with crippling costs after being required to travel to the UK five times in the opening stages of Super League’s restart. Any quarantine would effectively end their ability to remain in the competition.

Already reeling from the sudden loss of Toronto Wolfpack, a second departure from the sport would have caused further chaos for Super League and the Challenge Cup competition this year.

The exemption comes as a massive relief to Dragons officials.

“We’ve already spent upwards of half a million euros, unbudgeted, and without a single cent coming in. There is no way that we could also fund a three-month stay in the UK to complete our fixtures on top of our current expenditure.”

A club spokesman added: “We are working closely with the RFL and Super League on the matter.

“We are committed to completing the season in any way that we can, but the club would not have the resources to play the rest of the season in the UK.

“The costs would be too high on top of what we are already spending on a private jet. It is a massive financial effort at the moment, but if we had no home games we would have to refund sponsors and season ticket holders. It would be impossible.”

A Super League spokesman said: “The RFL has written to the UK government to secure exemption from quarantine. There is no requirement at this stage for Catalans Dragons to play all of their remaining fixtures in the UK.”

At the time of writing, France remained quarantine-free, and all eyes will be on the virus infection rates this week.