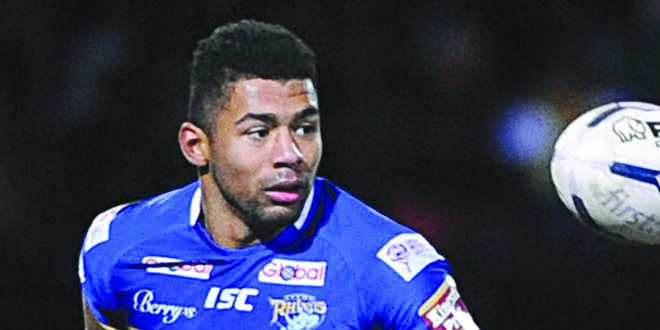 Leeds Rhinos captain Kevin Sinfield returned to action this afternoon at Headingley, as the Rhinos comfortably saw off the challenge of Super League’s bottom club, Wakefield Trinity Wildcats, to take a lead of four clear points at the top of the Super League table after nine rounds.

The Wildcats stay firmly rooted at the bottom of the table with just four points.

In front of 17,608 spectators the Rhinos scored eight tries, with Sinfield converting every one of them to take his career total beyond 4,000 points, becoming only the fourth player to reach that figure.

The Rhinos led 30-16 at half-time, gradually puling away in the final ten minutes of the half,

Ryan Hall began the game with a disallowed try, but there was no mistake on ten minutes when he touched down Burrow’s kick to the Wakefield line.

Wakefield soon hit back to draw level, however, when Tim Smith dummied his way over, with Craig Hall adding the conversion.

Zak Hardaker restored the Rhinos’ lead, but the Leeds fullback then gave away an interception to Wakefield fullback Hall, who ran the length of the field to touch down and convert his own try, restoring parity to the scoreboard.

Burrow then hit the Wildcats with a quickfire brace of tries, the first coming from a pass from Hall and the second when he backed up a Carl Ablett break.

The Wildcats hit back again, however, when Jarrod Sammut touched down after taking an Ali Lauitiiti pass, although this time Hall couldn’t add the goal.

But almost on the stroke of half-time Stevie Ward broke downfield after a Rhinos’ scrum and he gave the final pass for Kallum Watkins to touch down for a spectacular try.

The Rhinos’ next try came when Danny McGuire returned to the field and immediately created a try with a brilliant pass for young winger Ash Handley, prop forward Andy Yates then added the Rhinos’ seventh try from close range and Watkins scored their final try when he intercepted a Sammut pass and raced clear from half way.

Wakefield had the final say, however, when Daniel Smith ran onto Paul McShane’s pass to score under the posts, with Hall again adding the goal.