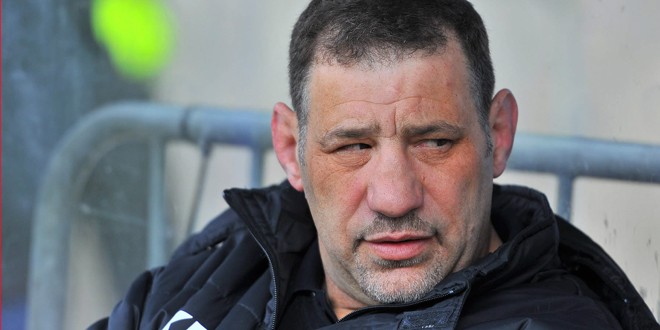 Halifax coach Karl Harrison was left questioning several key decisions during Sunday’s 36-28 loss to Leigh, as Fax threw away a 24-0 lead to slip to defeat in a crucial top-of-the-table clash.

Leigh did it tough, after Sam Barlow was sent off with just under half an hour remaining in a game that also saw four yellow cards. And Harrison cut a frustrated figure after the clash, questioning the two yellow cards his men received, amongst other decision.

“I don’t know why Tony Tonks gets sin-binned; he gets attacked at the ruck as he’s playing the ball, and the referee decides to sin-bin him,” Harrison said.

“I don’t know why Andy Bracek gets a yellow card either, because they were pre-meditated brawls by the opposition out there, in my opinion.

“We flustered them in the first-half, but they started two brawls and they seemed to get the momentum off the back of that. I actually thought the sending-off worked in their favour.”

Harrison admitted his side were poor in the second half, but again reiterated the point that his side received some tough calls throughout.

“There was some poor try line defending at times in that second period; it’s not the end of the season at all, but it was a disappointing loss without a doubt. Some of the tries they scored were soft, but boy did we get some tough calls.

“Ben Heaton knocked the ball on, but they did too in the lead-up to Matt Sarsfield’s try. I thought there was a crossing in their first try of the second-half that went unnoticed. The third try was certainly five metres forward – it even bounced forward after the pass had been projected forward.”