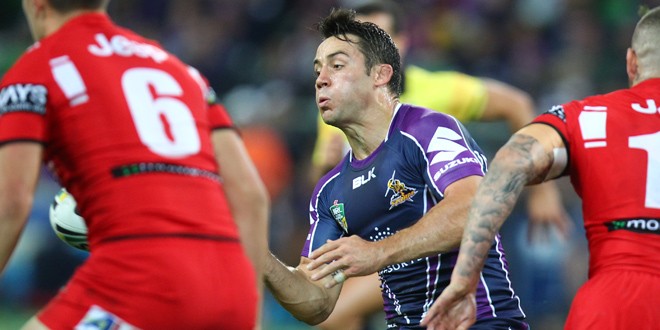 In a nutshell
Three tries in the final 13 minutes saw the Storm overturn a 14-point deficit and deny the Dragons their first win in Melbourne for 15 years.

How it unfolded
First half: In the early exchanges, Storm conceded three penalties, missed five tackles, and had just 34 per cent of possession. Gareth Widdop helped break the deadlock in the sixth minute when he set up a clever move down the left, which Dylan Farrell finished off.
Jess Bromwich tied the scores 10 minutes later, with Cameron Smith adding the extras to give Storm a lead they barely deserved.
Storm pushed further ahead when Will Chambers crossed in the 31st minute. The Dragons started to find form, though, and Brett Morris got a vital try before the half-time hooter. Gareth Widdop converted then added a penalty on the hooter to send St George into the interval 10-12 up.

Second half: Centre Gerard Beale gave St George the perfect start to the second half with a classy four-pointer. Back-rower Trent Merrin added another try in the 54th minute, which, with another Widdop conversion, gave the Dragons a 14 point lead. With less than 13 minutes to go, though, Storm came crashing back into it. Will Chambers crossed for a converted try before Cooper Cronk brought Storm within two points with 10 minutes to go. Neither side looked like breaking through and it seemed St George were going to hang on until Young Tonumaipea nipped through on the hooter to snatch victory for Melbourne.