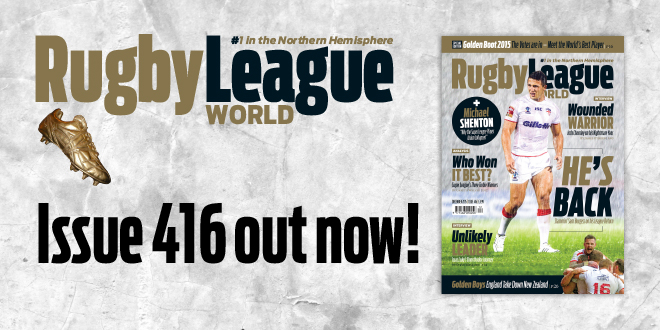 Issue 416 of Rugby League World magazine is out now – available both in newsagents and digitally. We have a great subscription offer in which you can get a year of digital issues for just £16.99 – a huge saving of £24 on the print version (head over to totalrl.com/rlw for more information).

Packed with unmissable features from the sport’s best writers, award-winning photography, columns from elite players, and cutting-edge design, it’s the best read in Rugby League – no question. Rugby League World is also the most popular monthly RL magazine outside Australia and it’s not hard to see why.

– Malcolm Andrews, a veteran of over six decades of Rugby League, asks whether Johnathan Thurston is the best player of all-time

– The prestigious World XIII is revealed in all its glory

– Olympus has Fallen: We were at Queen Elizabeth Park to see how the Olympic Stadium coped as a Rugby League venue

– The Forgotten Man: Josh Charnley on a disappointing campaign and his desire to win back his spot at Wigan and England

– Record Breakers: Adrian Morley on his Mount Kilimanjaro climb in aid of the Steve Prescott Foundation

– Dragons Fire: We caught up with the Wales team after they went from wooden spoonists to European Champions in the space of a year

– World in Motion: The RLIF’s recent action plan for the international game goes under the RLW microscope, while we also speak to chief executive David Collier

– Run for the Hills: Sam Burgess is back in Rugby League after a short stint in the 15-man code. We heard from Sam, as well as several of his peers in both codes

– In his latest column, Castleford captain Michael Shenton details the demise of player union League 13 and discusses the reasons for its closure

– Triple Treble: Which of the three treble-winning teams was best? And why? We speak to those involved and find out

– Video Nasty: Is it time for the video ref to go? We find out with the help of Tony Smith and Stuart Cummins

– Stay Classy: Ben Crooks is back from an unfulfilling stint Down Under and is hoping to recapture his best form at Castleford

– Ryan Brierley column: The Leigh star on his horror at the Championship Awards night and 2016 predictions

– Last Tackle: The peerless Dave Hadfield has the last word as always