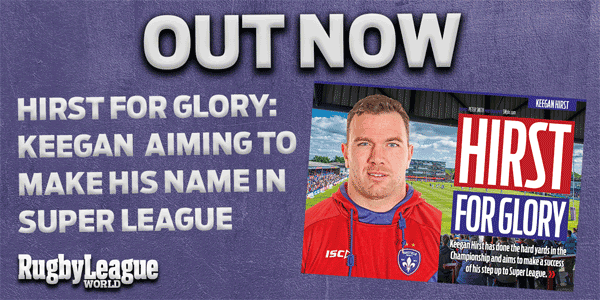 The brand new issue of Rugby League World Magazine is in shops now. It’s that time of year again when we unveil the winner of the Rugby League World Golden Boot and our all-star international line-up, the World XIII. You’ll already know by now that Cooper Cronk has claimed the Golden Boot, but get the mag to find out who joins him in the World XIII and who is the only English player to make the grade this year.

With an increasing number of British players heading to the NRL, we investigate the impact on Super League and England and ask, is it a blessing or a curse?

Following on from England’s disappointing Four Nations campaign, we hear from Sean Long on finding a solution to an English half-back crisis.

As the New Year dawns, we suggest a few resolutions all our clubs might want to make as they head into 2017, while also looking back at the players who led the way in Super League in 2016 as we pick out our Top 20.

There’s a chance to win the new Warrington Wolves home or away shirt, and get to know new recruit Andre Savelio.

Our cover star is Keegan Hirst, the Batley Bulldog already famous off the field, now aiming to make his name on the field in Super League with Wakefield Trinity.

Albert Kelly talks about his decision to switch clubs on Humberside, Marwan Koukash tells us why he is planning on taking a back seat at Salford and Lee Gilmour picks out his personal Dream XIII.

A club on the rise are Doncaster and we find out about their plans to make it all the way to Super League within the next five years.

Oxford’s Josh Scott tells us about his dual career, juggling Rugby League responsibilities with the RAF and our international coverage includes a trip to the Arctic Circle to find out how the game is growing in Norway.

All this and loads more, including the Women’s World Cup and amateur focus on Chorley Panthers and Skirlaugh.

In shops from Friday 23rd Dec 2016 and also available to download now. Get the Rugby League World app for your smartphone or tablet, or go to www.totalrl.com/rlw for other devices and desktops.