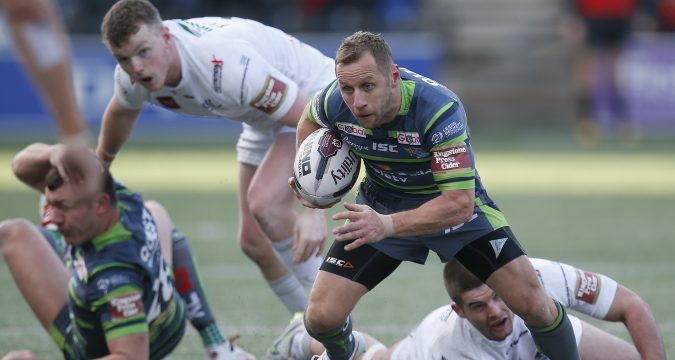 I often wonder whether we realise how lucky we are to have some players in our midst who will surely be regarded as legends of the game long after they have retired.

Rob Burrow, who played his 500th career game last Thursday night at St Helens, where he was the captain for the night in the absence of Danny McGuire, is one such player.

Rob made his debut on 6th April 2001 as an 18-year-old when Leeds faced Hull FC at Headingley.

He was chosen on the bench that night by the then Leeds coach Dean Lance after Iestyn Harris, the iconic Leeds star from those days, had to pull out of the match with an injury.

Rob started on the bench and came onto the field not long before half-time.

And what an impression he made.

As our reporter Phil Caplan, who has also stayed the course over those years, wrote: “On the stroke of half-time Leeds hit back. Burrow’s first touch, a pinpoint kick to the corner, was rewarded when Jason Smith made his only error of the night, knocking on near his own line.”

But the youngster wasn’t satisfied just with that.

“Having pulled back to two points down with the try of the night, created from distance and fashioned by Burrow’s lightning pace from a standing start and deft reverse pass to the ever-supporting Cummins, Leeds entered the last quarter with renewed enthusiasm and looked capable of an unlikely win,” added Caplan.

But Burrow had nailed his place in the Leeds squad, and he would be a first-team regular from that night onwards.

“Robbie was absolutely outstanding and showed them how to do it,” said Lance.

He would go on to make 17 appearances that first season, and he’s been a permanent fixture in the Leeds team since then, having played his 500th career game last week.

And it doesn’t look like coming to an end any time soon.

I spoke to Rob at the weekend and the good news for Leeds fans is that he has no intention of winding down his career in the foreseeable future.

But his latest career landmark more or less washed over him.

“I’m not one for numbers. It should have happened last season but I was injured for the last game of the season against Leigh,” he told me.

“So any plans to celebrate it had to be put on hold.

“It’s been a crazy career and has surpassed everything I expected. And the good thing about this team is that we are still hungry for more.”

Rob has so many achievements to his name that it must be difficult for him to decide which was the greatest, whether for Leeds, England or Great Britain.

“They are all different and are equally important. To star for my country is something I’ll never forget,” he added.

“But then back in 2001, coming into the dressing room and seeing my name on the back of a Leeds shirt with number 29 on it was incredible, although the name it had on it was ‘Burrows’.

“Every Grand Final win was different but fantastic. The 2004 game stands out because we finally got rid of the hoodoo of not winning the title.

“Winning at Wembley was a big relief. We’d been to Wembley so often and I loved everything about it, but there was always the disappointment at the end. The more times we lost it did creep into my mind that we might be destined never to win the Cup. To finally get that win against Castleford, my home town team, was as big a relief as any I’ve had in my career.”

I don’t know how many more games Rob will play, but it strikes me that when the RFL is apparently giving money to players to act as ambassadors for Rugby League, the governing body has missed a trick by not giving that role to Rob Burrow.

Every time he takes to the field he is surely Rugby League’s version of David versus Goliath, virtually against any other opponent he faces.

And yet there was no statement put out by the RFL last weekend paying tribute to Burrow, or even mentioning his achievement in passing.

We often complain about the lack of recognition given to our sport by many national media organisations.

But how can we expect them to recognise our heroes if the people who run our sport seem to be indifferent themselves?

No modern player will ever come anywhere near that total.

But Rob Burrow is a modern phenomenon, and I’m very happy to think that in League Express we have covered every aspect of his career.