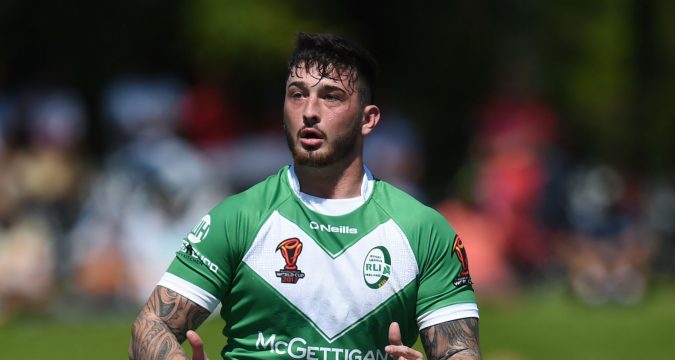 The World Cup has provided a platform for many stars to make a name for themselves on the international stage.

One of those who grasped that opportunity with both hands was Oliver Roberts, the 22-year-old Huddersfield Giants star who earned many plaudits for his excellent displays in Ireland’s campaign.

Roberts was one of the Wolfhounds’ star performers as they picked up victories over Italy and Wales while he also put in a strong display in the narrow defeat to Papua New Guinea.

His performances have been recognised in the upcoming edition of Rugby League World, which has seen the Giants ace named as one of the World Cup’s breakout stars.

Speaking to TotalRL, Roberts admitted he was delighted with his performances and was grateful for the chance to take part in a World Cup on the other side of the world.

“I was over the moon to be recognised,” he said.

“I went out to represent myself and my family and hopefully I’ve done that well.

“It’s probably one of the best experiences of my life. We went to Cairns, PNG and Perth, which were three amazing places.”

Roberts also saved praise for Ireland’s coaching staff for their organisation of the tour.

“The way Mark (Aston), Ryan Sheridan and Brett White had us pumped was outstanding. We bought in together.

“When we were training we were switched on and during off days we had a lot of fun. Mark said from the start it wasn’t a prison camp.

“I think we were billed as the underdogs there to fill a space but we knew we were there to do a job and push through to get to the next stage.”

The new edition of League Express features an in-depth interview with Roberts on interest from the NRL. Get your copy today in stores or online at totalrl.com/le