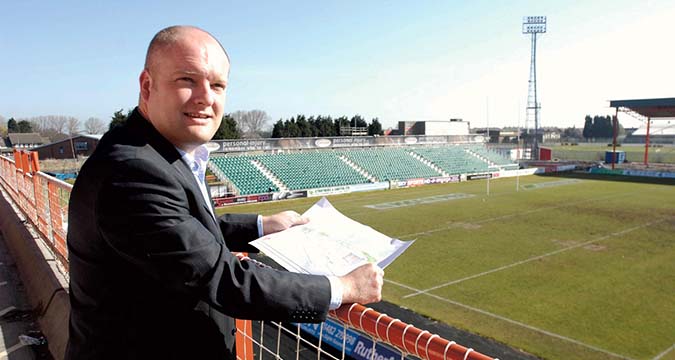 Hull Kingston Rovers Chief Executive Paul Lakin joined the club at the start of November, taking over the reins of management from former CEO Mike Smith and Chairman Neil Hudgell.

Lakin, who was a previous chief executive of the club, leaving in 2008 to join Wolverhampton Wanderers FC before moving on to work for Stoke City FC, has two key strategic priorities that will give a future strategic direction to the club.

The first was to complete a deal for the club to purchase the stadium and 15 acres of land surrounding it from Hull City Council.

The second was to search for new investors who would be prepared to join the club, either replacing or supplementing the ownership of Hudgell, who stood down from the Chairmanship on 30 November, although he retains his ownership of the club.

No one has yet been appointed to replace him, but Lakin admits he is relaxed about that.

“We don’t have a Chairman currently,” he says.

“I’m running the club in its entirety and I’m very much enjoying doing so. Neil has stepped away to concentrate primarily on his own business.”

And Lakin reports encouraging progress on the first of those two objectives.

“A large piece of my work has involved talking to the local authority about buying the stadium and the 15 acres that surround it,” he explains.

“It’s really important to develop the stadium, so if we’re going to do that, it’s important that we own it.

“It was important for Neil that we owned the stadium. The 15-acre site will be developed to become a mixture of green space, commercial, retail and residential. If we can secure the contract, we can draw down on that land over a period of two years, two or three acres at a time and develop the surrounding area.

“We can illustrate its importance by saying that while a few wins on the field won’t significantly change the course of the club, buying the land will.

“I’ve had really good conversations with the leader and deputy leader of the Council, as well as the head of regeneration, while our local MP Karl Turner has been very helpful and I’m very hopeful that the sale will be finalised in the next month.

“It’s a seven-figure purchase, at the correct going rate, and I have to say that it could not even have been considered without the incredible support of Neil.

“He has publicly stated that he has lost some of his love for the game, but I’m keen to carry on the good work he has completed.”

And, on the second point, Lakin has already been talking to some potential new investors.

“We’re looking to bring additional investment into the club, primarily to add to Neil’s investment,” he adds.

“We’ve done it in a strategic way, working with investment bankers I’ve worked with before during my career in football. We have signed numerous non-disclosure agreements and we are having conversations.

“None of those conversations are with people from the city of Hull.

“Of course it doesn’t mean that any of them will necessarily go any further, but there is significant interest in the club.

“Ideally we are looking for someone who happens to be a Rugby League fan and who has the finances to get into the game.

“To such a person, owning our own stadium would clearly be of interest.

“It’s all about thinking strategically.

“The preference for Neil is to own a smaller percentage of the club, but If the right investor comes along with a substantial offer, you never know, Neil might be prepared to sell his whole investment.”

If and when his two objectives are achieved, Lakin admits he would then turn his attention to the stadium infrastructure at Hull College Craven Park.

“Our priority would be to redevelop the main stand, because it is tired.

“We have no immediate plans to develop the south terrace, which we have only ever used for the Hull derby and we have a current capacity of around 10,000.

“But whatever happens, I want to deliver progress, with an increased emphasis on recruitment. The focus is on the bigger picture.

“I left Hull KR in summer 2008, and since returning I’ve noticed a huge difference in the city of Hull after the City of Culture investment and the new industries coming to the city.

“There’s a lot of opportunity here these days and we want to be at the forefront of it.”