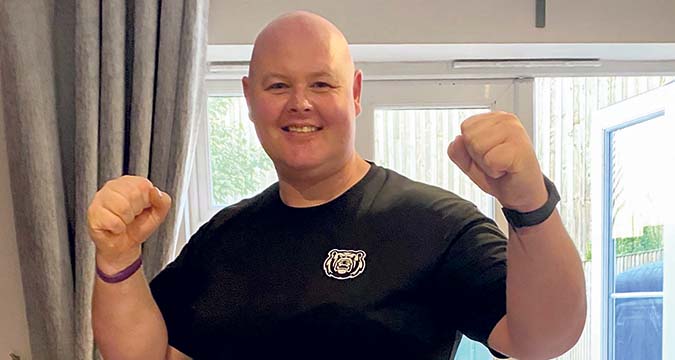 Gareth Walker talks to Alan Robinson about his life-changing moment

LESS than six months ago, Coventry Bears’ owner Alan Robinson was lying in a hospital bed fighting for his life.

Although this was at the height of the coronavirus lockdown, it was not a Covid-19 issue Robinson was dealing with, but the onset of sepsis.

After what he describes as 24 hours of “touch and go”, he started to respond to a new course of antibiotics, and thankfully made a full recovery.

But it sparked a lifestyle change for him that has seen him lose two and a half stones since returning home, as he steers the club he founded through its own 2020 issues towards a solid future.

Robinson explained: “I had a really bad infection in my bowel that hospitalised me.

“Because it happened at then height of Covid they didn’t want to do any major surgery or operate on me, so they loaded me up with antibiotics that after four or five days in hospital weren’t working.

“It was then that I started to contract sepsis, and for 24 hours it was touch and go and I wasn’t in a great place.

“From the Saturday morning I was on my back and couldn’t move my arms or legs. I was in a really bad way.

“They still didn’t want to operate on me and I was in a ward with three other guys with type one and two diabetes who were losing limbs.

“It was a really low point for me – I was really emotional, stressed and depressed.

“Luckily they got me on other antibiotics and by Sunday night I started to slowly improve.

“I was still in hospital for another ten days or so, but because of coronavirus they wanted to get me home as soon as they could.

“It was an absolutely horrendous ordeal.”

It was also one that initiated big changes in the former Ireland international’s life.

Robinson continued: “It was a real wake-up call in terms of my health.

“From when I finished playing rugby at 38 to now at 45, life had hit me. I was struggling with my knees and my weight spiralled out of control.

“It wasn’t a great position to be in. I wasn’t proud of it, and the reality really hit home with what I went through.

Robinson also revealed the support he had from within Rugby League during an ordeal that he kept largely private until posting pictures of his weight loss on social media last week.

He said: “I had great support from Ralph (Rimmer) and the RFL at the time – he was messaging me every day to see how I was.

“Guys like Carl Hall and Jon Flatman, who are good friends, were also checking in on me

“It’s not something I shouted about from the rooftops, but the response I’ve had on Facebook and Twitter has been unbelievable.

“I just wanted to put it on to say thank you to my friends, and I’m certainly thankful to the staff at the UHCW Hospital and all the NHS staff.

“It’s down to them that I’ve managed to get through this and sort myself out.”

And it means Robinson has been able to focus on the future of the club he has steered since its inception.

He added: “I’ve been proud of the lads through lockdown – we don’t have big names but they’re a very close-knit group.

“We’ve just secured £15,000 of funding from the RFL to set up three new satellite clubs, and the lads did a sponsored cycle ride from Hull to Coventry that added almost £3,000 to that.

“It’s brought us together as a group and it shows that we’ve got a really good mindset as a club.

“We’re doing our risk assessment at the moment and hope to return to training in November.”

And given his own transformation, maybe Robinson himself might be able to roll back the years with a couple of sessions himself.