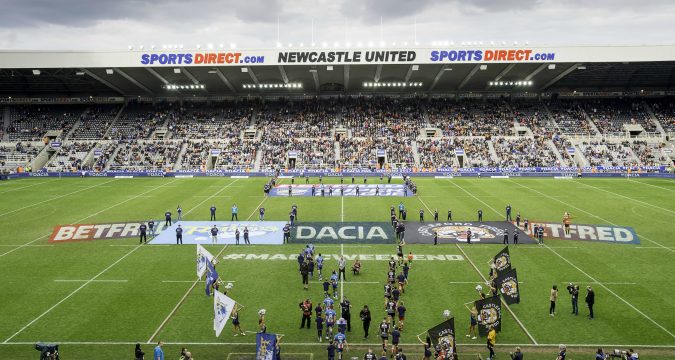 SPECTATORS at the Magic Weekend at St James’ Park, Newcastle on Saturday and Sunday will again be regaled by the sight of a sea of orange in one corner of the ground.

The colourful section will comprise players, coaches and administrators, together with family and friends, of Cramlington Rockets, who have sold 409 tickets for the event.

The Rockets, who are based seven miles north of the city, have now shifted over 2,000 tickets since the Magic Weekend moved to Newcastle in 2015 and Cramlington’s Chairman Jeff Ball enthused: “It’s a phenomenal show of support, made all the more impressive when you add on the 1,000+ tickets we have taken for Newcastle Thunder’s now traditional Friday-night curtain raiser at Kingston Park.

“There is nothing better than live Rugby League. I can still remember that feeling of walking to the stadium in year one and being amazed at all the different team shirts wandering around Newcastle with a buzz of excitement.

“Since then, Newcastle has consistently proved it deserves to be a home for Rugby League and it says a lot that this will be the fourth year Magic has been held here.”

The Rockets’ Under 8s will play during the match between Wigan and St Helens while sister club Alnwick Bears, who were established to increase playing opportunities in Northumberland, are to provide mascots for the Salford v Catalan game.

“Rugby League is all about opportunities and experiences,” added Ball. “We’ve been lucky enough to have our members involved every year, be it as mascots or walking the flags out.

“That creates memories that stick with people and creates an emotional attachment to the game. That’s how you create fans for life.”

“While the presence of Super League shines a light on the region for one weekend, it’s the legacy it leaves behind that is key. There is quality throughout the region. Cramlington Rockets are the current RFL National club of the Year and are the first North East team to enter a team into the Yorkshire Premier Division, where they are more than holding their own.

“Wallsend Eagles were the first North East side to enter the Ladbrokes Challenge Cup this year, Gateshead Storm finished seventh in the Kingstone Press National Conference League’s Third Division last year, and Whitley Bay have one of the country’s leading girls’ sections.

“With Newcastle Thunder’s Academy now regularly beating Super League Academy sides, and the first team aiming for a Betfred League One play-off spot, there’s progress at every level of the game.”

He concluded: “If Magic Weekend continues to charm the locals into getting involved, it is only a matter of time before we stop referring to the North East as being outside the heartlands.”