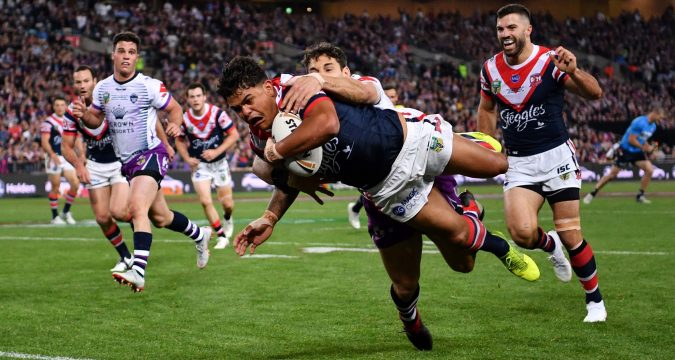 With Cooper Cronk on the field as almost a coach rather than a player, it was left to Luke Keary to physically mastermind the win and for Cronk mentally to do the same.

Sydney moved the ball left once again. This time it was Mitchell that put a left-foot step on Will Chambers before diving over.

The Storm were struggling to get a foothold in the game and fell further behind when Mitchell added two points. The penalty was awarded for a professional foul by Cameron Munster on Jake Friend. Munster was sent to the sin bin.

The pressure from the Roosters kept coming. Joseph Manu and James Tedesco caught the Storm short for numbers allowing the former to dive in for the third try.

The weight of possession swung heavily to the Storm in the second half. After plenty chances went begging for Melbourne, Keary’s intercept pass to Josh Addo-Carr provided the Storm with their opening try.

Keary made amends when he slotted a field goal a few minutes later to make the lead three tries. The Roosters saw the game out well culminating in Munster kicking out in frustration, earning him a second spell in the bin.

The full match report of the NRL Grand Final will feature in Monday’s League Express.