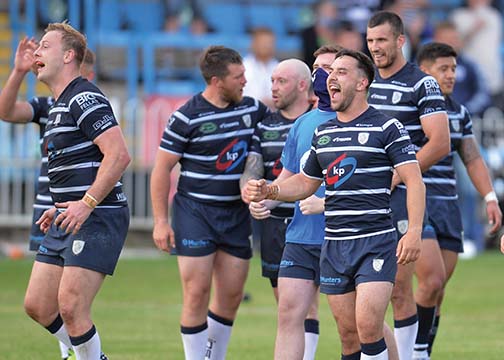 Featherstone Rovers chief executive Martin Vickers says the forthcoming trip to Wembley can reinforce Rovers’ push for Super League rather than act as a distraction.

Staff at the ambitious Championship club are awaiting RFL clarification on how many tickets will be available for the 1895 Cup final clash with York on Saturday, July 17.

The allocation depends on the further easing or otherwise of Covid regulations, and Vickers says interest is high.

Featherstone had won all seven league games going into their home game against Bradford after beating Widnes in the 1895 Cup semi-final.

They haven’t played at the national stadium since 1983, when, on their fifth visit, they beat Hull to lift the Challenge Cup.

“The whole town is buzzing, and the fact we haven’t been to Wembley for so long has only added to the excitement,” explained Vickers.

“Some final merchandise has been created, which is proving very popular, and we’re confident that we’ll sell out however many tickets we receive.

“We’ve made a great start to the season, and all credit to (coach) James Webster, his staff and the players for that.

“The twin target for this season was getting to Wembley and making the play-offs, and hopefully achieving the first will provide a boost for the second.

“My job is to make sure we are ready off the field if we do manage to win promotion, and with the competition in this division, we realise it’s a tough task.

“But we have to have the belief that we can do it, and we have to put things in place to make sure we can make the step up if we get the opportunity.

“The trip to Wembley give us a chance to put a few ideas into motion and see what works, and hopefully we will learn from it.”

For York, who beat Swinton in the semi-finals, it will be only a second Wembley appearance, the other one coming in the 1931 Challenge Cup final, won by Halifax.

It’s a major achievement for the resurgent club, who could have gone out of existence in 2016, and coach James Ford said: “I’m proud of the distance we have travelled.

“It doesn’t seem that long ago that we were playing on amateur fields and now we’re going to Wembley, it’s an amazing achievement.”

The 1895 Cup final will be played as a curtain-raiser (noon) to the Challenge Cup final between Castleford and St Helens (3pm).

It’s a change from 2019, the last time the 1895 Cup took place, when Sheffield Eagles beat Widnes Vikings after Warrington had defeated St Helens in the Challenge Cup final.