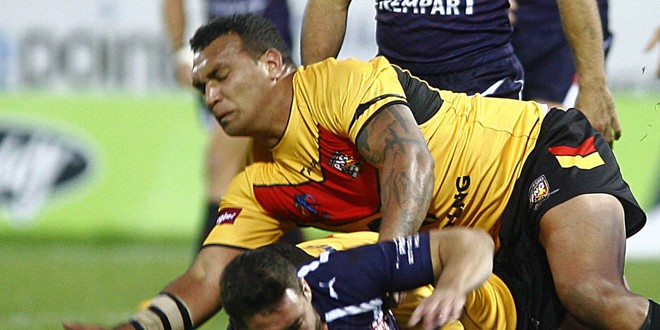 Hull KR second-rower Neville Costigan has called on his team-mates to improve their defence for this weekend’s clash with Salford Red Devils.

The Papua New Guinea international blamed poor one-on-one tackling for Sunday’s loss to Widnes Vikings, in which the Robins conceded two late tries to lose out.

“If we want to beat Salford we’ll have to get rid of those mistakes, especially in defence,” Costigan told the Hull Daily Mail.

“Our attitude wasn’t up to where it should have been. It’s a team effort, but the individual efforts didn’t help.

“There were too many one- on-one missed tackles which helped their half-backs to do what they wanted. Kevin Brown can do very special things on the pitch.

“The good thing about Rugby League is that we have another game this weekend to prepare for. Salford will be another battle and hopefully we can get back to winning ways.

“Sunday was very disappointing. Leading by seven points with seven minutes to play, you should win. You don’t have to do anything special to win.

“In future if we are in the same position, we have to get to our kicks and defend. We have to put the pressure on the other team and force them to throw the ball around and make mistakes. We didn’t think that way against Widnes and it’s very frustrating.

“Hopefully we can make Salford pay for our disappointment against Widnes. We were hurting after the game and hopefully we can put some points on Salford, but we have to stop them from scoring points on us too.”