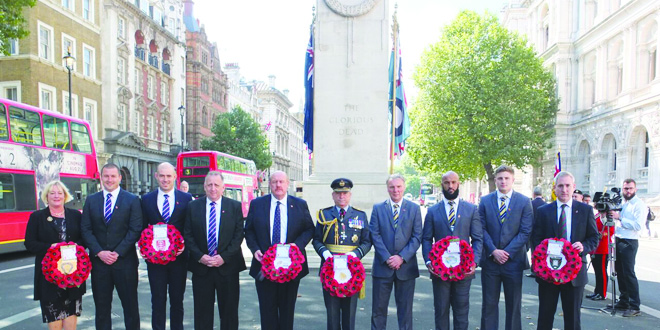 The Parliamentary Rugby League Group has laid a wreath at the Cenotaph in remembrance of those involved in Rugby League who have given the ultimate sacrifice in service to their country.

The ceremony was restored to Challenge Cup Final weekend tradition by HM Armed Forces in 2014, and takes place the day before the final. This year’s ceremony drew larger crowds from the rugby league family showing their support to the Armed Services, and was bolstered by hundreds of visitors to the capital.

The Group’s Chairman, Leeds North West MP Greg Mulholland, previously called on fans to be a part of the event. He said “to my mind, this ceremony represents the best of rugby league. Above all else, rugby league is a family and we look after one another. Like any family, we remember those we have lost and this both a poignant ceremony and fitting tribute to those in the game who have done so much for the country and for us.”

Leeds’ Jamie Jones-Buchanan added his thoughts afterwards, saying: “I am proud to be a part of this ceremony, as part of Leeds Rhinos, as a Rugby League player and as a person. Those we honour today were not just players and fans of our great game, they were and are true heroes and in this small gesture, we recognise and reflect on their profound courage and are grateful for all they have done for those they left behind.”

Hull KR Captain Terry Campese was one of the club’s representatives at the ceremony, which came before the club’s first Challenge Cup Final in 29 years. He said: “This is a hugely important part of the Challenge Cup Final weekend. It sets the foundation for what is a celebration of the sport the following day, and gives us pause to reflect and give thanks to all those who have given so much so that we might run out at Wembley and enjoy a great day. It touches you and it was an honour to be involved in such an occasion.”

Ceremony Leader Sir Stuart Peach summed up the poignant occasion: “We remember our colleagues, our friends and our family in Rugby League; all of whom have given so much. We honour them and their sacrifice, and we pay tribute to their courage and duty. As shown today, the rugby league family does not forget those who have served, and we demonstrate by simple but important act of laying wreaths that they and all those in active service today are with us in our thoughts, and we are grateful to them all.”

The Parliamentary Rugby League Group was instrumental in Rugby League being recognised in the Armed Services in 1994 and last year, its sister body, politicians’ team the Political Animals played an Army Veterans side at Royal Military Academy Sandhurst, including many players who took part in the first official Army Rugby League Game 20 years previously.