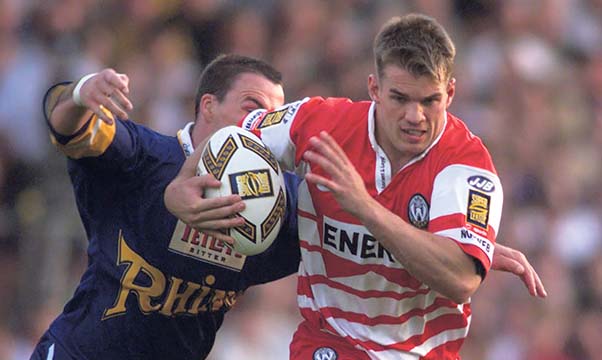 The Saint who shone for Wigan

A world-class fullback and a world-class centre, Gary Connolly was magnificent for St Helens, Canterbury, Wigan, Leeds and Great Britain in a professional career that spanned 17 years.

He was involved in a highly controversial transfer, he won numerous trophies at Central Park, and he picked up the coveted Lance Todd Trophy, despite his Leeds side losing the 2003 Challenge Cup Final.

The World Club Challenge in 1994. I can’t believe it’s 27 years ago! We’d had a long season, playing 50 or 60 games. We lost Andy Platt, Dean Bell and Kelvin Skerrett, so we were up against it. Graeme West was the coach, and he was brilliant because he said we could have a few days to enjoy ourselves and get our minds ready. We got back in training and were confident. The ball went our way, and we beat a very good Brisbane Broncos side.

If you could go back to the start of your career, would you identify as a fullback, a centre or someone happy to play both?

As an amateur, I never really played centre. I signed for Saints as a fullback, but it was only when Mike McClennan came over that I played centre. I’d never played there, and it was against Wigan who had the Iro brothers in the centre. We didn’t win, but it went okay, and I stayed there. I did prefer fullback, but I played most of my career at centre. It was nice to swap as it keeps you fresh.

Your experience as a 17-year-old at Wembley in 1989 might have scarred other players. How much did it affect you?

It wasn’t the best of days for myself and the team, but the biggest thing was just getting picked. I’d played every round but still didn’t know if I’d play. Then Alex [Murphy] picked me and it was fantastic to know someone like him had faith in me. The experience didn’t knock my confidence because anyone can have a bad game. Shaun Edwards came up to me after the game and told me to keep my head up, which was nice of him. He’d had a similar experience at that age.

In the 1992-93 season, Saints thrashed Wigan at home, only losing the title on points difference and then winning the Premiership Final. Where does that side rank in those you played in?

It was an excellent team. We had some outstanding young players in Chris Joynt, Sonny Nickle and Alan Hunte, and we were building a good side. There was a good atmosphere. Everyone wanted to win. All I wanted to do was play for St Helens, my hometown club. I loved it there and I have some great memories. Then they sold me behind my back.

You were selected for the 1992 Lions. Weren’t you the only player who could beat Malcolm Reilly in an arm-wrestle?

Ha! Well, I never went to arm-wrestle him. Steve Hampson lost to him then I beat Steve, so he went up to Malcolm and said, “I’ve found someone who can beat you.” Malcolm laughed when Steve said my name. But I beat him easily!

Getting picked for the tour changed my life because I was a bricklayer getting up at 7am, but I packed the job in and became a full-time pro. I started in the second team on the tour and ended up in the Test team.

You made a good impression in a four-month stint at Canterbury Bankstown in 1993. What was going on back home?

I loved my time at Canterbury. We won the Minor Premiership and it’s a big regret that we couldn’t make the Grand Final, but we lost to St George and Brisbane.

Canterbury wanted to sign me on a permanent deal and that’s why I ended up at Wigan. I said yes to Canterbury but said I needed a week to tell my friends and family I was moving over. Saints would have got 60 or 80 grand for me, which was the most they could get from an Australian club. But they wanted more and sold me to Wigan without me knowing. I didn’t have a clue Wigan were interested in me. Saints clearly didn’t want me – or more to the point they wanted the money. So I went to Wigan and got all the Judas stuff from Saints fans for years.

I was shocked at first. I got back from Australia on a Wednesday and made my Wigan debut on the Friday against Widnes. Saints were playing at Castleford on the Sunday and my dad used to organise a bus for the speccies from his pub. Stupidly, I jumped on and went with him. When I got on the bus, it just went quiet. Word got around at the ground, and I got absolutely hammered. But what was I supposed to do? Saints had sold me to Wigan. I could hardly do an interview as a Wigan player and say I hadn’t wanted to leave Saints.

But it proved to be the best move I ever made. I live in Wigan. I support Wigan. I wouldn’t change anything. What St Helens did to me was a blessing in disguise.

You missed the first four games of the 1995 World Cup with pneumonia and made your comeback in the final. Were you ready to play?

I was fine. I declared myself fit for the semi-final with Wales, but Phil Larder said he’d keep me for the final. I felt okay in the final. It would have been good to have had the semi-final under my belt, but that’s how the coach did it.

Were the cross-code games with Bath and the Middlesex Sevens a distraction you could have done without in 1996?

No, they were brilliant, and they broke up the season nicely. I loved both the Bath games – probably the union game more because it was such a challenge. We should have stuck to our own tactics, but we played Joe Lydon and Graeme West, who hadn’t played for years. When they came off, we went back to what we knew in the second half, and we scored some great tries.

The Middlesex Sevens was fantastic. Every time we played, the bars and car parks emptied, and there were 50 or 60 thousand in the ground wanting us to get beaten! When we got the ball, we were unstoppable.

Several of you played union in the 1996-97 off-season and Graeme West blamed that on you losing to Saints in the Cup. Was he right?

He might have had a point, but I snapped my cruciate in my last game for Harlequins, so I didn’t play against Saints. I should have been out for a year with a cruciate knee replacement. But I said I’d play on without the operation and, if it went wrong, I’d have the op and then miss the year. I came back a few weeks later and played the rest of my career with no cruciate. I had some needles to drain the fluid before every game. As the year went on, there was less and less fluid.

How did Wigan lose to Sheffield in 1998?

Look at the Sheffield team. Everyone underestimated them, but they were a good side, and they didn’t drop the ball until about the hour mark. You have to take your hats off to them. It was like Salford in 1996. We thought we’d win, but we also thought it would be tough. In the end, they were too good.

Did Wigan go through too many coaches in your time?

Yes, they did. They seemed to sack someone every year. But the biggest problem was losing players like Inga Tuigamala, Scott Quinnell, Martin Offiah, Henry Paul and Jason Robinson, and not replacing them.

What took you to Leeds?

My contract was up with Wigan, and I went to play rugby union for Orrell. Joe Lydon, the England Sevens coach, told me he’d discussed me with Clive Woodward for the England World Cup squad in 2003.

But at the end of 2002, I ended up playing for Great Britain because Kris Radlinski and Paul Wellens were injured. Gary Hetherington approached me because he needed a fullback. I’d only played once for Orrell, but Gary persuaded me to go to Leeds.

You’re one of nine Lance Todd Trophy winners to come from the beaten side, but you were criticised for your demeanour in collecting the award. What happened?

I was upset because I knew it was my last chance of a final and I knew what that Leeds team was going to go on to achieve. I wanted to win something with them. It was such a close game, and the atmosphere was unbelievable.

They had just presented Bradford with the Cup. They were all celebrating and spraying champagne, and I had to go up for the award in front of all my team-mates who were also crying. I could hardly celebrate! It was very emotional, and I was so upset. I don’t regret my reaction because there was no disrespect intended.

Why did you leave Leeds?

I signed for two years and wanted to stay. I’d had a good season and was picked in the Dream Team at fullback. I hadn’t done a full season at fullback for ten years and was loving it. But Leeds changed their coach, and he [Tony Smith] wasn’t keen on me for some reason. He said I wouldn’t play first team. I asked if I could stay and help Richard Mathers develop. He said he didn’t need any help. I said I could play centre. No again. “You’re not needed,” was the message, so I left.

I phoned Andy Farrell to tell him I was retiring. He put the phone down and quickly rang back. He’d spoken to Denis Betts, the coach, and although they couldn’t pay me because of the salary cap, I was welcome to go back to Wigan. So I ended up playing for nothing in 2004.

I was going to retire again, but Terry O’Connor and Mick Cassidy moved to Widnes and talked me into joining them. I had an agreement with Frank Endacott that said I would play fullback, and that was what convinced me. I enjoyed the first three-quarters of the season, but it fell away after that, and it was a real struggle.

Was your nickname ‘Gary Lager’ a fair representation of your drinking abilities?

No! Believe it or not, I was never a big drinker. The name came about because I didn’t like hanging around the dressing room after a game, so I’d be first out. I’d head to the bar and have a lager shandy. That’s where the nickname came from, and I went along with it.