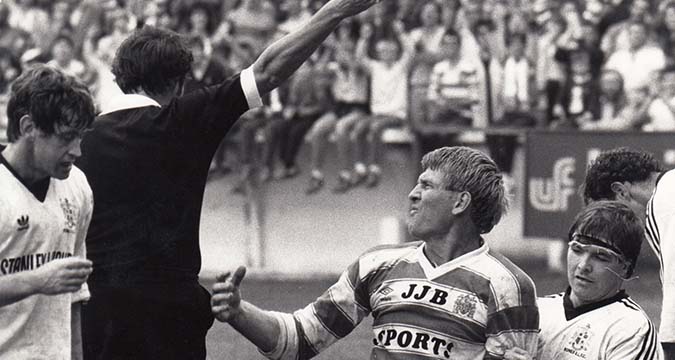 The Kiwi who made a career in Wigan

The giant Kiwi Graeme West signed for Wigan in 1983 and gave the club 14 years of wonderful service as player, captain, A-Team coach and head coach.

He captained the club to victory over Hull at Wembley in the classic 1985 Challenge Cup Final, and returned ten years later as coach, masterminding another triumph, this time against Leeds. 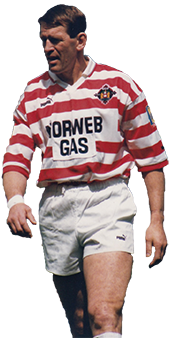 RR: If you could relive one day from your career, which would it be?

GW: I’d go for the day I started to play Rugby League. I had a great uncle who was an All Black and I played rugby union from primary school until I was 16. Someone at work one day tried to convince me to switch to Rugby League. “No way,” I said. “I’m not playing that game.” But I was talked into going away with his team for a weekend and to have a few beers. I got on for 40 minutes, scored two tries and thought, “Jeez, I love this game!”

RR: I thought you’d go for the 1983 Lang Park Test or the 1985 Wembley final. How did the Kiwis tear up the formbook to beat such a good Australian team on that first occasion?

GW: We’d worked real hard over a few years to get to that point. Under Cec Mountford’s coaching, we improved and improved. We should have beaten Australia in 1982. We led 8-6 with five minutes to go, but they scored in the corner and won 11-8. Cec had stepped down for Graham Lowe for the 1983 games, so he got all the plaudits, but it was a brilliant performance, and it was great to finally beat them.

RR: You captained Wigan twice at Wembley. How did you bounce back to win in 1985, after the disappointment of 1984?

GW: Kevin Tamati and I went to watch the 1983 final between Hull and Featherstone because a few of our Kiwi mates were playing. Kevin was at Widnes and I was at Wigan. We just looked at each other and said how much we wanted to play there. A year later, we were lining up against each other, but Widnes were too good for us that day. During the 1984-85 season, we worked real well together. There were no big names in the forwards, but we did well, and the backs benefited from that. John Ferguson and Henderson Gill were great on the wings. Mike Ford and David Stephenson were good players. Brett Kenny came in as the missing link and Shaun Edwards at fullback really benefited from Kenny’s ability. Wembley against Hull was just a fantastic day. It was a real team effort. The backs got the headlines, but the forwards laid the platform. The forwards had also done a real job against Hull KR in the semi-final. Shaun Wane scored the first try. My boot hit him in the knee, and he was out for the season and missed the final. I always felt bad about that!

RR: You didn’t enjoy your early days at Wigan when you were coached by Alex Murphy. Tell us the sand-bucket story.

GW: I didn’t play well in the John Player Trophy final against Leeds in 1983 and Alex hauled me off. When we were lining up a kick at goal, he sent me on with the bucket of sand. We didn’t have a good relationship. The older people at Wigan always told me Murphy was one of the best players ever but, gee, as a coach, I would say he’d have to be the worst I ever had. He’d come in, yell and scream and then go home again. So, anyway, I ran back to the bench with this bucket of sand and made out I was going to throw it at him and his assistant, Bill Ashurst. They both ducked, which I found very funny. Bill said he really thought I was going to throw it. I tried to get the directors to get rid of Murphy earlier and, when they eventually did, the team then took off. He eventually got the sack after the Wigan Sevens in 1984. Colin Clarke and Alan McInnes had done all the work and Alex just turned up for the final and expected his winning bonus. Maurice Lindsay said no, so Alex threw a telephone at him. When I next saw Maurice, he had bruises all over him.

RR: You took over as Wigan coach in 1994 from John Dorahy. What had been happening behind the scenes?

GW: When my first-team days ended, I was player-coach of the A-Team for five years. During that time, John Monie was great, and we had some laughs, but when Dorahy came in, everything changed. Maybe he thought I was a threat to him. He alienated the players. He was a bit arrogant. When he got the sack, they asked if I’d do the job.

RR: In your first four games, you won a derby and two trophies. How did you prepare for that World Club Challenge win in Brisbane?

GW: When I got the job, I spoke to the players and told them they needed to pull their socks up. Neil Cowie and Jason Robinson had been sent to the A-Team by Dorahy, which I couldn’t believe, especially when he picked Inga Tuigamala on the wing for Wembley ahead of Robinson. Inga had a bit of an injury and I used that to get Jason back into the side. We beat Castleford at Old Trafford in the Premiership Final, but Dean Bell and Andy Platt were off to Auckland Warriors and Kelvin Skerrett had broken his jaw against Castleford. They all missed the trip to Brisbane. We got there on the Thursday, had a good run out, then I gave them two days off and said I wanted the best possible training session on Sunday. I explained to the directors that Dorahy had given the players such a hard time that they needed to unwind. Some of them went for a beer or two. At 6am on the Saturday, I went for a walk on the beach and Jack Robinson shouted over, “I’ve just seen Martin Hall going back to the hotel!” I thought that might be the end of my coaching career. But on the Sunday, Shaun Edwards got the players together, got their heads in the right place, and we had a superb training session. Martin Dermott was injured. Barrie-Jon Mather was playing on one leg. We only had one prop, so Billy McGinty gave it a go and he was magnificent. I was no fan of Cowie – he was an obnoxious bastard – but he had a great game, and we came out with a win, which no one expected.

RR: You then had a fantastic 18 months, winning two league titles and more cups.

GW: It was such a challenge with all those competitions. The fixture pile-up was huge if you did well in the cups. In 1994-95, we only lost twice. One was at Halifax on a Wednesday night. Then we beat them by 60 points on the Sunday. I had John Pendlebury coaching the A-Team and he was great. He was as big a part of winning that Championship as anybody.

RR: What went wrong against Salford in 1996 when Wigan eventually lost a Challenge Cup match?

GW: When I selected the team, I picked Scott Quinnell and thought that a big forward pack would take Salford to task and the backs would then take over. We had two tries disallowed for forward passes. The penalty count was against us. We were good enough to win, but we didn‘t play well and that was partly my fault. We just looked at each other after the game, trying to work out what had happened.

RR: Wigan played Bath in two cross-code games in 1996. Was there a gentleman’s agreement that you wouldn’t score 100 points in the Rugby League match and why did you select yourself at the age of 42 to play at Twickenham?

GW: There was no agreement like that, but I did take off players like Henry Paul and Andy Farrell very early, which is probably where that rumour came from. I just didn’t want them getting injured. I did say to Bath at half-time that they could make as many subs as they wanted and that we would stick to just six. To be honest, we could have put 150 points past them. I know union had just gone professional, but Bath really weren’t fit.
As for the return game, I’d been playing veterans’ rugby union, so Joe [Lydon] and I thought we’d play. Again, we wanted to avoid injuries. But we did think we had a chance of winning if we could get the ball to our outside backs. We’d just won the Middlesex Sevens. Gary Connolly was done for a forward pass that was a poor call and we had a very good second half, running in some good tries. But their scrum was too good, and that’s the main part of rugby union. After the game, my neck felt like it had had a ten-ton rock on it!

RR: Your time as Wigan coach ended after defeat to a 12-man St Helens team in the Challenge Cup in 1997. Were you harshly treated?

GW: There was a bit of a shit fight happening at the top of the club. Players like Doc Murray and Paul Koloi had been signed by someone after being watched once. They were nowhere near Kiwi standard. Some of our best players had been loaned to rugby union clubs over the winter to save on wages and two came back injured. So, preparation for the Saints game was never going to be right with all that going on. Maybe I should have put my foot down further, but I did voice my concerns. After the Saints defeat, they directors didn’t blame themselves for buying players who weren’t good enough or for sending players to rugby union. I got the blame – probably for criticising them. I think Dave Whelan was onto them at this point, strangling the financial side of things. The team was going backwards. They actually wanted to make me football manager. Joe had done that job, but I could see he was just a puppet and didn’t actually decide anything. There was no way I was doing that job, so I left.