John ‘Keith’ Bridges followed in his father’s footsteps in becoming one of the game’s best hookers.

Christened John, but nicknamed Keith after his dad, Bridges was part of the great Featherstone Rovers team of the 1970s before successful stints at Bradford Northern and Hull FC. He toured with the 1974 Lions and played for England in the 1975 World Cup.

It’s got to be the ’73 Challenge Cup Final when Featherstone beat Bradford Northern. It was the perfect day. Everything came off and all our moves worked. We had the game in the bag by half-time. It couldn’t have gone better.

What do you know of your father’s career?

He played for Wakefield and Castleford from 1954 to 1963. But I don’t really remember going to watch him. I had three sisters, and my mum couldn’t take us all. He was a very good hooker, one of the best of his time. He didn’t play internationals, but he played in a good team with players like Jack Hirst, Kenny Pye, Albert Lunn, the Bryant brothers, Alan Hardisty and Keith Hepworth.

When were you first called Keith?

My name is John Howard Bridges. When I was born, my mum and dad split up for a few weeks. In that time, my mum christened me. My dad was Keith and wanted me to be called that, but my mum wouldn’t have it as we had too many Keiths already. But when they got back together, he started calling me Keith and it stuck.

How big an influence on you was Peter Fox?

Huge! Peter was my coach for ten years for Featherstone, Bradford and England. He did things that no other coaches had considered, like moves from tap penalties, moves in your 25, run-arounds and all sorts. If you look at the ‘73 final, Vince Farrar scored a try from a perfect cross move. Peter’s strong point was talking. He could convince you a great player wasn’t as good as you, and you believed what he said.

How different was the role of the hooker in the 1970s?

Completely different! It was an art. I remember we played Salford in a Challenge Cup match in the early 1970s. Ellis Devlin was their hooker, and it was when they had Brian Snape’s money, so they were a top side. I took the first 12 scrums of the match and we beat them. That gives your team a huge advantage.

How difficult was it to win a scrum against the head?

Well, I had a good teacher in my dad! I once won a scrum count 29-4, so you could win plenty against the head with the right approach. He told me the fastest striker and the best cheat would win. You needed a loose arm, which meant not binding properly to the prop further away from where the ball was being put in. It was against the rules, and you had to get the loose arm right, or you’d all end up on the floor.

Who were the best hookers of your day other than you?

Colin Clarke, Tony Fisher, Keith Elwell and David Ward. I could go on – there were no bad ones in those days. They were great strikers of the ball. Keith was an unusual hooker because he was small and very agile in the loose. Then you had Tony who would run through a brick wall. He was the hardest man you could play against. You were scared looking at him. Jimmy [Thompson] and I recently sat with him at a Rugby League Cares dinner, and it was the first time I’d got to know him properly. Lovely bloke!

Why do you think the scrum evolved to what it is now, with striking becoming redundant?

I retired in 1983 and hooking was still a big thing then. It hurts me now to see uncompetitive scrums. My belief is that Australians didn’t produce many great hookers, apart from Elwyn Walters, so they adapted their game to get rid of the hooking part of it. In the early 1990s, it suddenly became very different. It might look cleaner now, but it’s not the same game. All the Wembley finals of the 1970s were so enjoyable, much more so than recent ones, because too much has changed, and not for the better. Games are too predictable now. Nobody does anything different. There have been too many rule changes that haven’t improved the game.

Tell us about some more of your Featherstone team-mates.

When people talk about the history of Featherstone Rovers, they would surely say the 1970s was the best era.
One of the best things Peter did was switch John Newlove from centre to stand-off. Everything then revolved around John. He wasn’t physical, he was tall and dangly, but he had a brilliant brain, and Peter got the best out of him by moving him to stand-off.
Stevie Nash was a brilliant scrum-half. I’ve already mentioned Jimmy, Vince and Charlie, but Les Tonks was an outstanding open-side prop. He stood up [in the scrums] and I could get to the ball quicker because of him.

Why couldn’t the team repeat its Wembley heroics 12 months later?

I’d never watched the 1974 final until recently. I got punched and knocked unconscious. They got me up and I stayed on the field, walking around, totally unaware of where I was. I then got taken off. There’s a lot of controversy now with brain injuries and memory, and I couldn’t remember that incident. It was a savage punch. My wife at the time asked why I’d been sent back on, but I couldn’t even remember being taken off. Cyril Kellett had dementia in his 30s, so it is scary.

What are your memories of touring with the 1974 Lions?

The first thing was finding out I had been picked. I worked for my dad on a builders’ site. I asked him to get a paper because the Lions squad was due to be announced, but he said we’d have to wait till dinner time. When I eventually got a paper, that’s how I found out. I couldn’t believe it. It was one of the greatest moments of my life.
We lost 2-1 to Australia in the Ashes series. I got a couple of injuries. A couple of people like Jeff Grayshon had to come home early with injuries. I was 22 and I’d never been on a plane, then I was flying across the world to play for my country. We were away for 13 weeks. Getting fitted up for blazers was a brilliant experience. Jimmy Thompson, Steve Nash and Terry Clawson were also selected. Being picked for your country to play Australia and New Zealand is the bees’ knees.

We were the first to play an international in Papua New Guinea, although it was a friendly. I remember a set of traffic lights in the main street. People used to just sit and watch them because they’d never seen traffic lights. There were no hotels, so we had to stay in army barracks in wooden huts. We were only there for three or four days. I always remember we were advised that if we hired a car and hit somebody, then we shouldn’t stop because there was an eye-for-an-eye mentality. Nobody did hire a car!

You became the first player to win the League Championship with three different clubs. Which of those teams was the best?

The best? I can’t answer that! It meant most to win with Featherstone though. To win a league title is unimaginable for them now. It was a great achievement. 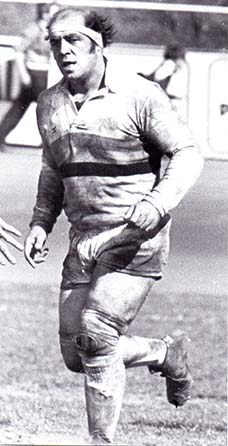 Why did you join Bradford?

I started the 1978-79 season as a Featherstone player but injured my knee. I had an operation, which the Wakefield Chairman paid for because he thought I might sign for them. But Peter came in and took me to Bradford, who already had Jimmy Thompson. Featherstone were then relegated that season.

How was life at Odsal?

It was great to be coached by Peter again and to play alongside Jimmy. Len Casey was there and the Redfearn brothers. It worked out well for me and I won every medal with them, as I had done with Featherstone. But I had knee troubles and told Peter I’d have to retire. He agreed, but asked me to come back if Brian Noble got injured. Sure enough, he wanted me back a few weeks later because Nobby got picked for Great Britain Under-21s. We played up at Barrow and I won the scrums, and Peter talked me into playing for the rest of the season. Nobby couldn’t get back in the team, we won the Championship again, then they sold me to Hull for £25,000!

Why did you stay for just one season at The Boulevard?

I played for Hull at Wembley in 1983 and then went back for the start of the following season. I had to catch a bus from Featherstone to Pontefract where Barry Banks would pick me up and drive me over. This was twice a week. We’d train at Hull, then he’d drop me at Ackworth Pit for the nightshift and I’d get home at 4am. So, at that first training session of the new season, Arthur told me to train with the ‘A’ Team. I said I couldn’t do that at 31 with all the travelling, so I left and never went back. It was the only real disappointment of my rugby career. It hurt.
But I really enjoyed the 1982-83 season at Hull. I played alongside Gary Kemble, James Leuluai and Dane O’Hara – it was a great team. The coach, Arthur Bunting, was a Featherstone bloke and with Knocker Naughton, Sammy Lloyd, Kevin Harkin, Dave Topliss and Trevor Skerrett, there were more players from Castleford and Wakefield than from Hull. Arthur bought class players for certain positions.

How did Hull lose that final to Featherstone?

I don’t know. As an ex-Featherstone player who has always lived in the town and worked down the pit, you can imagine the abuse I got losing to them as a Hull player. And that still gets brought up more than the 1973 final! I can’t really explain how Hull lost, but the result is all that matters. Featherstone were better than us on the day. You can examine the teams as much as you want. Featherstone should have never beaten us, but that’s the beauty of sport.