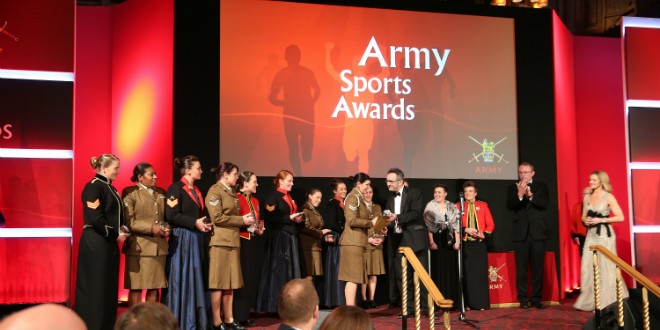 Staff Sergeant Sean Fanning and the Army Women’s Rugby League Team were amongst the winners at last night’s Army Sports Awards held at the Guildhall in London.

The Army Women’s Rugby League Team were proud recipients of the Army Sports Team of the Year award for 2014 whilst Staff Sergeant Fanning was honoured with a Lifetime Achievement Award.

The awards ceremony, hosted by Gabby Logan, aims to reinforce the importance of sport in the Army and was attended by RFL Chairman Brian Barwick, who was on hand to present Staff Sgt Fanning with his award.

“On behalf of the whole sport I would like to congratulate both the Army Women’s team and Staff Sgt Fanning on their awards, which are richly deserved,” said RFL Chairman Brian Barwick.

“The growth of Rugby League in the Army is a terrific success story and these awards are further recognition of the huge strides the sport is making in the Armed Forces.”

Staff Sgt Fanning has represented the Armed Forces at the highest possible level, including an operational tour to Afghanistan in 2012 and volunteered for his final operational tour as a Multiple Medic less than 12 months before leaving the Army.

He founded the Rugby League-based charity ‘Soldiers League’ to raise funds for service charities and wrote a book documenting the history of Army Rugby League, the profits from which he has donated to the charity.

Staff Sgt Fanning has worked tirelessly as an organiser, manager, leader and coach in order to play the great game of Rugby League. He also captained Great Britain Armed Forces in 2008 during the Armed Forces World Cup which they went on to win, beating Australian Defence Forces 26-16 in Sydney.

The Army Women’s Rugby League Team remain unbeaten in the Inter-Services tournament since it started in 2008. The side also provides the backbone of the Great Britain Armed Forces Women’s Team.

The women’s team have enjoyed a successful and dominating season competing in the Challenge Cup, Hilary Steele Plate and the Inter-Services Competition. They have an outstanding record this year with just one defeat in seven games. That defeat came in the quarter-Final of the Challenge Cup against Thatto Heath where they gave the overall winners of the competition a mighty scare.