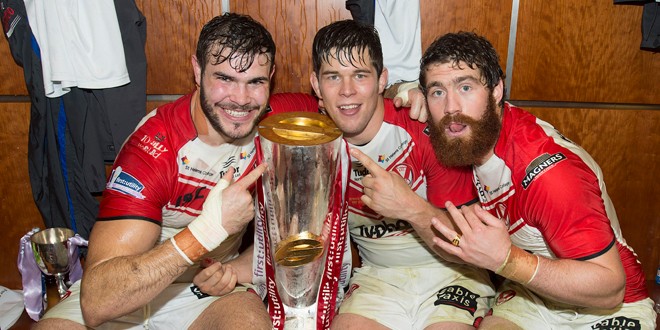 EVERY MORNING WHEN I wake up, I count my lucky stars — I feel extremely fortunate to be playing the sport I love most at such a high level and making a living out of it.
But the truth is this all came as a huge surprise to me.
Indeed, despite being an ambitious lad, I never envisaged being in this position.
Just five years ago I was representing the British Amateur Rugby League Association (BARLA) while playing at my hometown club Dewsbury Celtic and attending Leeds Metropolitan University.
I was playing with my best mates and got to experience tours with BARLA so I was really content — I never thought I would kick on and try get into Super League. At that age I was all about enjoying the sport and being with my friends. That social side was very enjoyable. My Saints team-mate Kyle Amor came from a similar background, playing amateur rugby until his early 20s and also benefitted from the experience, which I think gives you a unique grounding and a real appreciation for the game.
For the first two or three years at university I never bothered about the rugby team. I used to go home on weekends and play for Celtic as they had a summer league and I was playing all year round.

However, we had a friendly against the England students one weekend and their coach Paul Fletcher, who also worked at Leeds Met, approached me after and invited me to play for the university.
Luckily, I was watched by Batley Bulldogs coach John Kear — a friend of Fletcher’s — in just my second game for Leeds and he invited me to have a trial with the Championship club. I quickly obliged and upon completion was offered a deal, which I signed immediately.

I was allowed to finish the season with the university as we had a lot of unfinished business, and met up with my new team-mates for the 2012 season. I made 19 appearances for Batley in my first year and was named the league’s young player of the year, which was a great honour. We made the play-offs but lost to Sheffield.

Soon after, Mike Rush from St Helens got in touch and offered me a four-year deal. There were rumours at the time that several Super League clubs were in for me, but only Saints made contact and I was more than happy to sign with such a great club.
One of the conditions I had in my contract was that I needed to be playing regularly for development purposes, so Saints agreed to send me out on dual-registration to Batley for another season.
I was more than happy with that and aimed to play just a handful of games for St Helens that season.
However, due to injuries, I was thrown in the deep end early on and Nathan Brown stuck with me. It was a surprise to everyone, not least myself — I fully expected to spend the entire season with the Bulldogs.
It took me about six months to be able to speak to the likes of Paul Wellens and the other big-name players at the club. I was struggling to say boo to a goose as they were the players I looked up to growing up. To find myself alongside them was a surreal feeling and it took a long time to get used to.
I believe agreeing to join St Helens is the best decision I have ever made, though. The club has the ideal balance of youth and experience and with the calibre of players here I have learned — and am still learning — a hell of a lot. Not only that, the town is amazing. There is no football around there — it’s all Rugby League and the town thrives off that. That’s why it was so easy to sign a new deal at the club. Staying grounded
I am very flattered to have received so much praise over the last year or so but, with the greatest respect, it’s something I take with a pinch of salt. The thing is, I am by no means the finished product — I have a lot to learn and am still absorbing all I can from the players and coaches around me. I just want to keep training hard and improve in every area.
To do that, I like to concentrate on the negatives in my game instead of the positives.
I view the England links in a very similar way. As much as I see it as a genuine goal and something I would love to achieve, I don’t want to put a timescale on representing my country. If it happens this year or in 10 years I don’t mind. England boasts some of the best props on the planet, so I know I have a lot of work to do to force my way in there. I just want to focus on developing as a player and hopefully a call-up would come on the back of that. I would love it to happen but I don’t want to put all my eggs in one basket. CREDIT TO COACHES
I believe some of the biggest influences on my career have been the coaches under whom I have worked. Each one has been hugely talented and given me great advice and guidance. At Dewsbury I had Paul Heaton, who was superb, as was Paul Fletcher at Leeds Met.

John Kear needs no introduction having coached England while Nathan Brown was responsible for giving me my big chance. And now I’m working under one of the best players in Super League history in Keiron Cunningham.
Aside from that, I feel experiencing the game at almost every level helped me appreciate it more.
I’ve seen lads working from 8 ‘til 5 grafting then training three nights a week and playing on weekends.
It gives you so much respect for these people and I think it really helped my development.