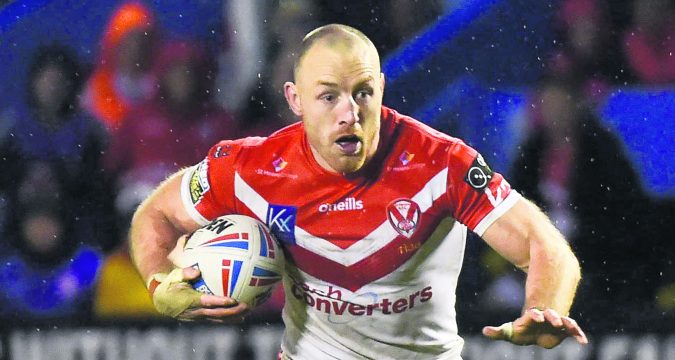 HE’S the peerless leader, the master craftsman, the ageless orchestrator.

James Roby is a lot of things to a lot of people, especially in and around his hometown of St Helens.
17 seasons ago, Roby donned the Red Vee of St Helens for the first time. 454 appearances later, his legend is already deeply embedded in the town’s history. Three Super League titles, as many Challenge Cup triumphs and a World Club Challenge for good measure, have ensured his club icon status.

Yet even now, at the age of 34, he shows no signs of slowing down.

If anything, Roby has got better as he’s entered what should be his twilight years.

“He is one of the best I’ve ever seen,” Holbrook memorably said after a play-off victory over Wigan back in 2018.

“I can’t rap him enough because I think that highly of him, as we all do.”

As Roby’s career has developed it has been his ability to maintain such impeccable standards, and to produce them so consistently, that has seen appreciation of him rise to such heights.

Commentators often describe a piece of brilliance from a veteran athlete as them ‘rolling back the years’. But to describe anything Roby does now in that manner would be a disservice to his longevity.

Many strive for Roby’s prolonged success, although very few achieve it. But the formula behind his excellence is not what you’d expect.

“I find it easy to switch off from rugby,” he says.

“I don’t really watch much rugby at all. I like to switch off from it. I think that side of things helps me out. I know other lads are obsessed with it and watch every game they can, but that’s not me. I don’t watch a lot of games.

“Like most rugby lads, I’m competitive and I want to win. Even if it’s just wrestling or a little sprint. I don’t think I’ve ever lost that desire. But I just try to keep things simple, I don’t worry about things that aren’t in my control; I can only control my effort in training and my drive to win.

“I’m also very lucky. I understand how lucky I am to be at a club like St Helens. I know it’s a great story being a hometown lad, but we’ve had great players year on year, a core group of internationals. You’re only as good as the people you’re playing with and that’s where I’m grateful for being at this club in a period where it has always been near the top.”

In his view, the title-winning side of 2019 was the best St Helens side he has played in. Roby was undoubtedly instrumental in that success, but individually it was a year of frustration as a groin injury hindered him throughout the campaign.

He still made 20 appearances. And while opponents would argue otherwise, it was an injury that he struggled to play with.

“I was struggling all last season with it,” he admits.

“If you’re looking through the physio records it will show that it’s been an issue for a few years, but I only felt it started to affect me about a month into last season.

“I couldn’t move as well with my change of direction. I couldn’t really take off or get any acceleration. I suppose I’m always going to have a few mobility issues as a 34-year-old playing years of Rugby League.”

But, in news that will no doubt strike fear in the rest of Super League, Roby now feels back to his best.

“I had an operation mid-season, but that didn’t really help. But we had another surgery in the off-season and we’ve rectified it now.

“The rest has done me some good, although it’s not to celebrated because of what’s going on in the world. We’re all used to getting injured and getting on with it; you play with symptoms every week and once you’re well enough to play you’re back in, but you’ve never fully recovered. But the time off has allowed me to recover naturally and I feel as fresh as I felt a few years ago now.”

That leads the conversation onto next year’s World Cup. Roby will be 35 by the time that event rolls around. But he’s determined to do everything in his power to ensure he’s a part of Shaun Wane’s squad, in what could well be the final chapter of his incredible career.

“I’m in that training squad and, to be honest, I was surprised,” he admits.

“I’m at the back end of my career and a lot of other great hookers are playing for spots.

“I’m made up to still be in contention and I’ll be doing everything I can to be selected. To win a World Cup and bow out of international rugby, and maybe even my career – what a way to go that would be.

“I’m really positive about England. Shaun Wane is saying all the right things, he’s put a lot of thought into it and he’s a passionate guy who speaks really honestly and makes it black and white. From a player’s point of view, I like that. If you want to be selected you know what he wants out of you. I’ll be doing everything I can and, even if I’m not involved, I hope England can win the World Cup.

St Helens return to action on Sunday against Catalans Dragons after something of a shaky start by their own standards, managing just three wins from their opening six games.

Roby, however, is unconcerned.

“You ask me and I’ll always back us.

“We were a little bit scratchy and a few people may doubt us. Rugby League does that; you only have to lose a few and they think there’s something wrong.

“But there’s nothing wrong. As soon as we get back we’ll turn that tide back and climb the table. I’m more than confident that we’re fighting fit and raring to go.”