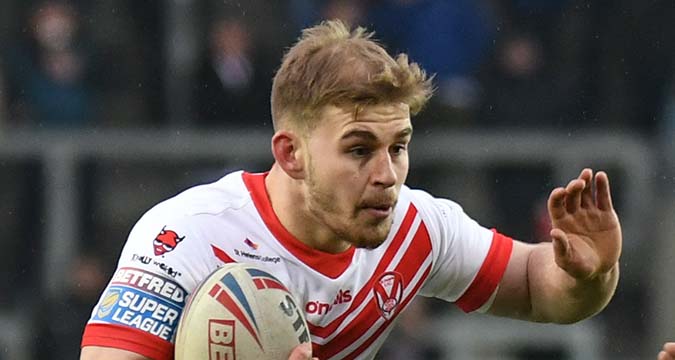 St Helens have agreed to allow two of their younger squad players to go out on loan to other clubs.

Josh Eaves (above) has joined Wakefield Trinity, whilst Nico Rizzelli has linked up with Swinton Lions in the Championship.

Both moves are initially two weeks with both then reviewed on a week-by-week basis.

Josh Simm has returned to the Totally Wicked Stadium after his loan period at Leigh Centurions ended. He made one appearance against Castleford in a 52-16 defeat.

Eaves also recently returned from a short spell at the Centurions, but now gets an opportunity at Wakefield. The 23-year-old hooker scored in his only appearance in 2020 in a narrow defeat to Salford and has made a total of three appearances in the Red V.

Rizzelli, 21, is a centre signed from Rochdale Mayfield who has made the first-team squad despite playing only one season at Under-19 level. The club describes him as “a powerful runner with a great future.”. He made his debut in defeat to Salford in 2020.

Saints coach Kristian Woolf said: “It’s a great opportunity for both players to go and play some regular Rugby League. It’s difficult circumstances for those guys because if they are not in our side, we can’t give them game time. It’s a chance for both to continue their development and it’s a real win for all the clubs.”

St Helens will continue to monitor both players on a week-by-week basis to ensure they receive regular game time.