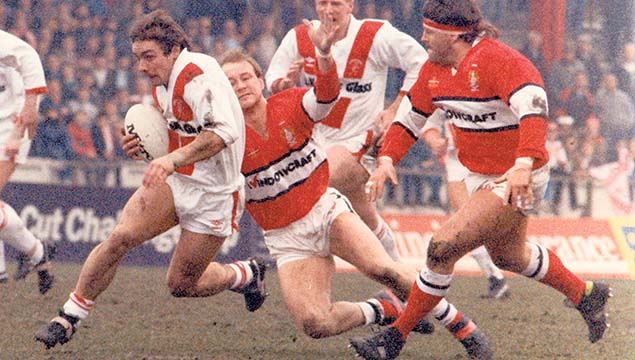 He was the first-choice scrum half for the Lions on their 1984 tour of Australia and New Zealand.

After spells at Rochdale, Oldham and Bradford, he became the Knowsley Road compère, entertaining fans and ruffling feathers alike.

I’m going to pick three. When I was 17, Eric Ashton picked me in the 1978 Wembley squad to play Leeds, which was a great experience. When the game finished, he admitted he should have put me on the bench.

Then there’s the first Ashes Test in Australia in 1984, which was my first Great Britain cap.

And then winning the John Player Trophy against Leeds in January 1988. We beat them 15-14. Paul Loughlin had scored all our points until my late drop-goal, which meant I got the headlines and not him!

What do you remember of your Saints debut at Swinton and how good was the team you came into?

I’d watched them play for years. I was in awe of them, but I don’t think the occasion fazed me. I wasn’t a cocky scrum-half but having a bit of pace stood me in good stead.

Playing alongside my old PE teacher John Mantle was unbelievable. Georgie Nicholls took me under his wing, but I had a good rapport with everybody. In my early days at Saints, we were in something of a transition with me, Harry Pinner, Graham Liptrot and other young players coming into the team.

Did you expect to be Great Britain’s first-choice scrum-half on the 1984 Lions Tour?

I didn’t have any expectations. I was up against Andy Gregory and Ray Ashton. I had a good game at Newcastle in the sixth tour match. It was the last game before the first Test, so that helped me get picked.

Getting selected for the first Test was a huge honour. My mum and dad were so proud. But I injured my groin after 20 minutes and that was it. I still played in the next two Tests and the first against the Kiwis before my groin went again.

We did lose the Tests against Australia and New Zealand, but we closed the gap from 1982.

What do you remember of Mal Meninga’s time at St Helens in the 1984-85 season?

I’d played against him on the tour, so I was delighted when we signed him. Ray French went over for Brett Kenny and came back with Meninga. He was a breath of fresh air for the whole club.

He had so much time for the spectators. He’s such a big fella, but he was so meek and mild. He never lost his rag. He said he’d come back for another season, but it didn’t happen for some reason.

But he wasn’t perfect. We played Hull KR in the Challenge Cup at home. The game got delayed by about half an hour. In that time, he seemed to switch off and they beat us 8-3.

But he’s remembered best for the two finals – the Lancashire Cup against Wigan and the Premiership against Hull KR. He got two tries in each game. He got rid of David Stephenson and Shaun Edwards like they were flypaper. He was so fast.

Which Wembley defeat hurt the most?

I’ve never watched either of them again, but 1989 was worse. We were red-hot favourites to beat Halifax in ‘87.

There were a couple of things that could have gone differently, and we came close to winning.

As for ‘89, we’d beaten Widnes in the semi, which no one expected, but Alex Murphy let the Aussies [Paul Vautin and Michael O’Connor] go home, then he flew them back for the final, despite their replacements busting their arses in the games in between.

We were all in camp for the final and they got brought in and were allowed to go around London with their wives. Neither of them played well and we got embarrassed.

If you look at the try Hanley scored, Wigan cut us to ribbons. We came off and Murphy said, “Why didn’t you drop a goal?”

Terrible. I’ll never forget when he took over. A couple of us were playing pool after training. He came up, picked up the white ball, pointed to me and started telling me what he expected from me. Then he threw the ball onto the floor and walked away.

If you get a chance to watch an old Saints game when he was in charge, all you hear is him shouting “Neil! Neil!”

He was constantly on my back. At Leigh one time, I broke my thumb and my jaw. Murphy still kept me on. I couldn’t pass and I couldn’t talk.

John Clegg, who was actually the club dentist, came into the dressing room at half-time to take me to hospital and Murphy told him to get out. He pointed to me and said to the lads, “Look, we’re in a cup match and he’s bottled it!”

I just got stripped off and went to Broadgreen Hospital. Eventually the club sacked him.

Why did you leave Saints?

Mike McClennan was Murphy’s replacement, and he didn’t fancy me, unfortunately. He was as mad as a box of frogs. He used to do a column in the St Helens Star, and I hadn’t heard of half the words he used to use.

He used to tie a piece of corn around his waist and tell us it was to help him lose weight.

Tony Burke and Roy Haggerty didn’t have a clue what he was on about. So we went out onto the training field and he had us practising taking drives up “the road”, “the street” or “the motorway”.

When it was Roy’s turn to take a drive up “the street”, he suddenly stopped dead. Mike went mad. “Why have you stopped?” he shouted. Roy looked at him and said, “The traffic lights have turned red!”

You also played for Rochdale Hornets, Oldham and Bradford Northern.

Rochdale got me in as player-coach after Allan Agar had left. That was a hard job, but it was a learning curve.

Then I went to Oldham briefly. I was supposed to go to Widnes in exchange for Joe Grima, but it fell through when Joe got injured. I went to Bradford as understudy to Deryck Fox and I looked after the ‘A’ Team.

Then Super League came along, and I called it a day in 1995.

Did you miss playing?

At first I did. But even though I’d finished playing for Saints, I was still working there as groundsman.

I became head groundsman in 1994 and I did that for four years before taking up the same job at Liverpool FC, where I worked until 2014. After that I set up my own gardening business.

You were the matchday compere for St Helens for many years. I remember you ripping into how boring rugby union was when Saints played Sale in 2003.

Ha – yes! Dewi Morris referred to me on Sky as Norman Wisdom.

The game was a publicity stunt that didn’t work.

The most memorable experience I had was after a home game with Wigan.

I used to get the crowd to do Mexican Waves. When it got to the Wigan end, I said, “Whoa whoa, this doesn’t include you!” I got loads of abuse.

So I thought I’d wind them up and tell a joke – “What’s the difference between a walrus and a woman from Wigan? One is ugly with big teeth and the other lives in the sea.”

Anyway, a huge fella, about 18 stone, stood behind the sticks, was shouting that he was going to kill me, but he couldn’t climb over the wall to get onto the pitch.

Two days later, I got a phone call from St Helens police. They’d received complaints from Wigan spectators, saying that I’d used foul and abusive language, brought the game into disrepute and incited a riot.

That was all untrue, but I was told to turn up at 6pm with a brief. The club got me a solicitor. He thought we’d be there ten minutes, but we didn’t get out until 9.30pm!

The interview was recorded. Suddenly, they paused the tape and told me to retell the joke. They pissed themselves laughing and then restarted the tape.

At the end, they suggested I accept a caution. I refused because I hadn’t done anything wrong, so I was finger-printed and had a mug shot taken. I appeared at St Helens Crown Court three times.

I was due to appear at Liverpool Crown Court at 2pm one day and we had three comedians lined up, including Stan Boardman, to testify that it wasn’t an offensive joke. At 11am the Crown Prosecution Service kicked it out, deciding there was no case to answer.

I was given the case notes and they were about eight inches high. The police had even gone to interview a Wigan fan in Truro!