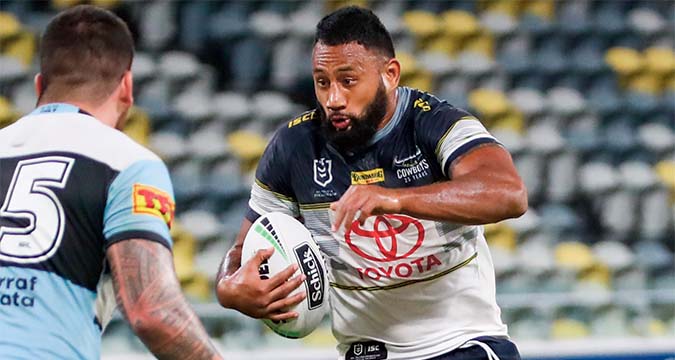 St Helens could yet land Francis Molo after it emerged the forward has yet to sign a new deal with North Queensland Cowboys.

League Express revealed last month that the Super League champions had made a move for the 25-year-old Cook Islander.

It was understood the Saints’ chances of signing the forward were slim. Despite offering him a deal, he had also been offered a contract extension with the Cowboys and other NRL clubs are understood to have shown interest.

However, it’s believed the prop has yet to sign a new contract in the NRL and is now seriously considering a move to Super League for next year and could end up being the middle forward that head coach Kristian Woolf has been searching for.

Woolf previously coached Molo, 25, when he was in charge of the Townsville Blackhawks in the Queensland State competition in 2017 and 2018.

Saints have already signed Manly Sea Eagles backrower Joel Thompson for next season but still have a quota spot. With Luke Thompson gone, and Jack Ashworth expected to depart, Woolf is on the lookout for a forward and Molo could yet be that man.

Another forward off-contract at the Totally Wicked Stadium is Kyle Amor, though a decision on his future has yet to be decided.