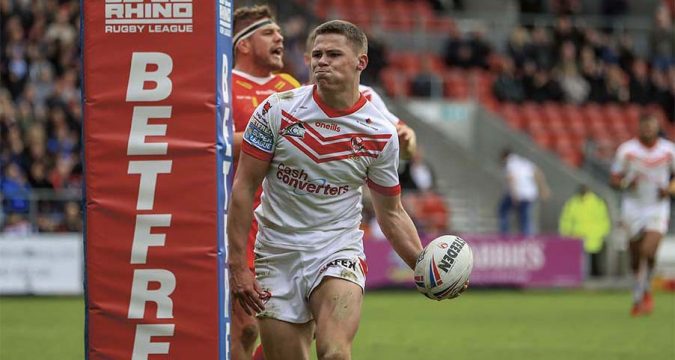 St Helens’ young star Jack Welsby signed a new four-year contract with the club last week and he has told League Express that he is hoping to improve sufficiently over the next two years to come into the reckoning for England for the 2012 World Cup.

Welsby, who can play in several positions in the backline, but is most widely regarded as a fullback, is also hoping to force his way into the Saints team next time they reach a major final, which he hopes the club will repeat in 2019.

“Playing in the World Cup, if possible in 2021, is a massive aim for me,” Welsby told League Express.

“It’s every young players’ dream to play in a World Cup. It’s a rare thing that happens only every four years.

“I missed out on both major finals this year, at Wembley and Old Trafford, so my immediate ambition is for the club to go back to both venues and for me to be picked in the matchday squad.”

Welsby is the latest in a long line of players who have come through the St Helens youth system into the first team, although at the age of 18 he still has plenty of time on his side to claim a regular place in the team.

In 2019 he was a strong contender for both the Albert Goldthorpe Rookie of the Year Medal and the Super League Young Player of the Year award, but lost out to Morgan Smithies of Wigan and his team-mate Matty Lees respectively.

“Matty had a great year, but it was a shame that he missed out on two big finals with injury,” said Welsby, who admits that his participation in St Helens’ Academy’s trip to Australia, and England Academy’s 2-0 series defeat of the Australian Combined High School team last year were seminal moments in his career so far.

“I’ve been as St Helens since the age of 14. The importance of the Academy is a real philosophy at our club.

“Two years ago October 2017 I had just joined the Academy and we won three out of four games in Australia, just losing the last one against Penrith. It was a massive test and it will be interesting to see who makes the grade in the NRL from the players who we played against.

“Last week we beat the Aussie Schoolboys and we had a really good squad. Those results just show how good the young players are in this country.”

And Welsby reveals he has no immediate ambition to play in the NRL himself, while he hopes to do enough to impress Saints’ new coach, Kristian Woolf.

“I am really happy at St Helens, which is reflected in the deal I’ve just signed,” he said.

“I want to become a regular in the squad and challenge other players. We all want to play at Wembley and Old Trafford.

“Kristian has come in and when you look at our results last year, you can see why he hasn’t made many changes so far.

“Obviously I hope he likes what he sees in me and I’m trying to impress him and challenge people in my positions. But I will take his opinion on board and respect it totally.”