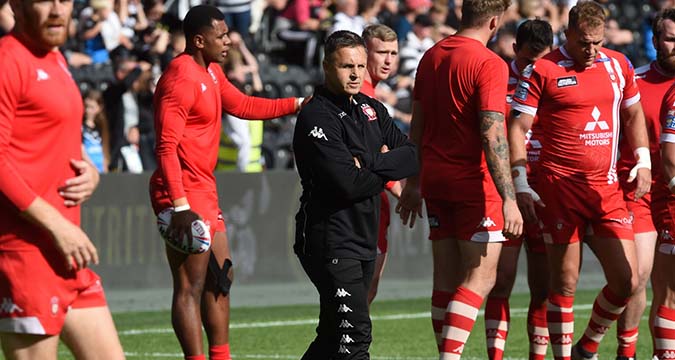 Salford Red Devils will start interviewing candidates for their head-coach vacancy this week.

The club has drawn up a shortlist of prospective candidates and will begin the interviewing process on Tuesday, with several coaches under consideration.

One man who won’t be taking the job is Paul Rowley (pictured), the existing Red Devils coach who worked alongside Ian Watson.

He is, however, expected to remain in his current consultancy role with the club after making an impression since his arrival last August.

Initially, the club had predicted the selection process would be finalised early next week, a timeframe that still appears realistic.

Meanwhile, the club is understood to be working on squad preparations for 2021, with both recruitment and retention being worked on for next season.

Before his departure, Ian Watson had emphasised the club’s need to recruit in the pack and that’s understood to still be the focus heading into the off-season.

Last week the Red Devils announced a two-year extended contract for Dan Sarginson, who has been in outstanding form in recent weeks, although he had to miss the club’s biggest game of the season.

“I was gutted to miss out on Wembley this year, so hopefully we can be in another major final next season and the Challenge Cup would be perfect,” said Sarginson.

Meanwhile, the club was bolstered by the news that its player welfare and team manager Marlon Billy has also committed to a new deal with the club.

“I’ve really enjoyed my time at the club so far. We’ve got a great group of players and there’s a real family feel,” said Billy.

“It’s been a dream to be part of some big occasions and it’s made us all hungry for more.”

Fans were also left delighted as the club finally updated its signage at the AJ Bell Stadium.

The club’s old Salford City Reds logo, which hadn’t been in use since 2014, had remained lit up on the side of the stadium for years, much to the annoyance of supporters.

But on Friday it was finally updated and replaced by the new crest that the club unveiled last week.