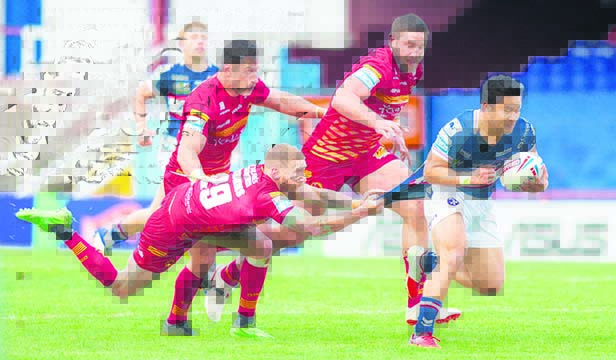 SAM TOMKINS will skipper England against the Combined Nations All Stars at Warrington on Friday evening.

The 32-year-old Catalans full back is well known to national team coach Shaun Wane, from their time working together at Wigan.

Tomkins will be making his 30th England appearance, with 25 Tests alongside three outings against the Exiles and one against the New Zealand Maori representative side.

Unable to travel by commercial flights due to public health and quarantine rules, both he and Dragons teammate Tom Davies drove from the South France to join the England squad.

Tomkins said: “Being named captain of England is right up there with anything I’ve achieved in the game.

“I have been really lucky to represent England a number of times over the years, but becoming captain is something else.

“I’ve played under some great captains over the years – Sinfield, O’Loughlin, Peacock – and hopefully I’ve picked some things up from them.

“Shaun will expect me to lead from the front, which is what I intend to do.

“The journey from France was something out of the ordinary. A 16-hour drive isn’t normal preparation for an England game, but Covid has turned the world upside down in lots of ways.

“I was told I’d have to drive in a single hit – no hotel stops, pay-at-the-pump petrol stations – but playing at international level is something I’ve wanted to do since I was seven years old, so a 16-hour drive is nothing against being able to pull on an England shirt.”

Wane, who has lost St Helens forward Alex Walmsley from his squad due to injury, said: “I’ve known Sam a long time and he’s the perfect captain. He handles himself well, he’s a very skilful player, plays a key part in games and offers real quality from fullback.”

The game, which kicks-off at 8.15pm, forms part of a double-header with the England versus Wales women’s international at 6pm.