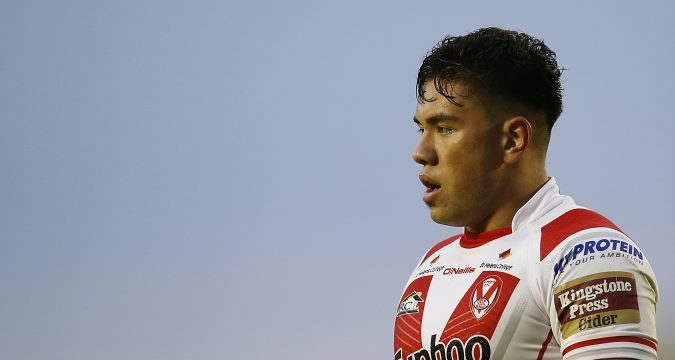 ST Helens forward Andre Savelio is tipping local rivals Warrington as a team to watch out for in Super League this year.

Warrington spanked Widnes 40-0 recently and have recruited strongly with Kurt Gidley, Tom Lineham, Joe Westerman, Jack Hughes, and Mitchell Dodds all joining the club. Savelio, the 2015 Albert Goldthorpe Rookie of the Year winner, was at the Select Security Stadium for the match and was impressed by the Wolves’ showing.

He expects the usual suspects to be challenging for silverware, including treble winners Leeds Rhinos, as well as St Helens.

“Leeds have lost a few but they’re always there or thereabouts,” Savelio said.

“Warrington looked very sharp against Widnes. They’ll be competitive, more than they were last year. I’d say they’d be the ones to watch.”

Savelio enjoyed a promising campaign with Saints, managing 24 appearances last season after making his debut in 2014. He crossed for two tries and set up two, and was a constant menace to defences with 44 tackle busts and 251 carries during the season.

And now he says he is feeling good after a gruelling pre-season with Saints that has included an Army camp.

“It’s been a tough one, probably the toughest one I’ve done yet,” he admitted.

“I’m probably back at my peak fitness again now. We went to an Army camp for three days down in Plymouth. It was an adventure just getting there as the coach broke down getting up a hill.

“We were up at the crack of dawn at the camp, and one night they got us up at 2.00am and had us doing fitness till 6.00am, and that questioned our character, definitely.”

St Helens play their first pre-season game of the season at Langtree Park against Dewsbury Rams on January 17 and Savelio is expecting to feature in the match.

“I’d imagine we’ll all have a run out in the first game against Dewsbury, and then the coach will narrow the team down for the Widnes game to see what he’s going with for the start of the season.”