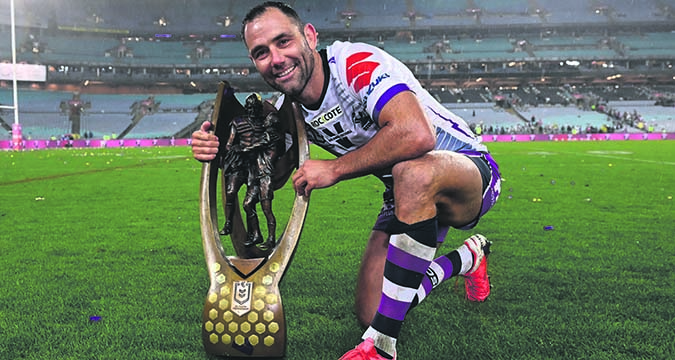 He was nicknamed ‘The Accountant’, and looking back over Cameron Smith’s career, the numbers certainly stack up.

Two World Cup wins with Australia, eleven State of Origin series with Queensland and three NRL titles with his only club Melbourne (and it would have been five had the Storm not been stripped of their triumphs of 2007 and 2009 for breaching salary cap rules).

Twice a Golden Boot winner as the best player in the world, twice winner of the Dally M medal for ‘best and fairest’ in the NRL, and nine times hooker of the year.

He captained his club, state and country, and has played more NRL games and scored more competition points than any other player.

Of course, he’s a shoo-in to become an Immortal, and while I’ve said plenty of times that I don’t like overseas players coming to Super League in droves, wouldn’t it have been amazing if a club over here could have tempted him to see out his career in the Northern Hemisphere?

He might be 37, but Smith still looks like he could play 160 minutes, never mind 80, and that’s reflected by the reported interest of both Brisbane and Gold Coast, to where he has relocated with his family.

Imagine the boost a player like that would have provided by turning up in England rather than hanging up his boots after 19 years of top-level action.

Not only was he a superb player, but he is also a great ambassador for Rugby League, and hopefully will continue to be so. And his presence in Super League would have provided a very solid platform from which to promote our game and bring in much-needed sponsorship.

He certainly wouldn’t have come cheap, but you have to speculate to accumulate, and handled the right way, Smith’s contract would have paid for itself and more.

Now we’re all waiting to see what will come next, whether it’s a coaching role, TV punditry or maybe even a career away from Rugby League.

For the time being, we can reflect on his rugby, just as when the other members of Melbourne’s ‘big three’, Cooper Cronk and Billy Slater, called time.

I consider myself privileged to have played alongside another of the great Australian hookers, Benny Elias, at Balmain, and while the role has changed over the years, I think Smith would have been great in the position in any era.

The mental side of his game was as good as the physical, because he had a real calmness to go alongside his vision, awareness and organisational skills, and he almost always seemed to be in control, both of himself and the match.

Smith was very solid defensively, he could mix it with the toughest if the need arose, and he was a great kicker, whether from the tee or the hands.

Since he announced his retirement, I’ve seen it said that he wasn’t the most entertaining of players, but the fact is that the work he got through enabled the box-office boys to do their stuff.

Smith was just as important as the guys who got the tries, if not more so, because without him, the chances to produce a defence-splitting run or a spectacular finish wouldn’t have been nearly as plentiful.

And in my experience, he was as classy off the pitch as on it.

I spoke to him during the 2017 World Cup and we shared a joke about my view of Wayne Bennett being the England coach.

He was good company and generous with his time, not just to me but to the many people asking for photos and autographs.