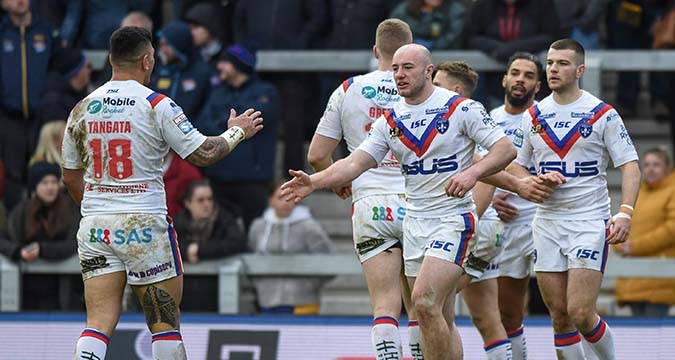 1: They might have suffered many absences through injury and Covid-related issues, making it difficult to put a settled line-up on the training field, never mind in matches, but Trinity, who survived a relegation scare in 2019, probably can’t afford another campaign as unproductive as this if they are to keep the Super League status they have held since 1999.

2: There is still some loyalty to a coach. Wakefield suffered ten straight defeats, one in the Challenge Cup, post-lockdown, and Chris Chester was coming under real pressure, not least from a section of the Trinity faithful. But Chairman John Minards and chief executive Michael Carter kept faith with the man who has been in the post since March 2016. Time will tell if they were right.

3: Wakefield have to get more out of David Fifita. At times during the 2020 season, the ‘Big Bopper’ looked far from a happy bunny, and there was that curious phase when the former Cronulla prop, who can be such a handful, refused to wear the GPS tracking device crucial to coronavirus protocols. That was one if the factors which restricted him to just eleven appearances out of 21 matches.

4: Keeping Tom Johnstone fit and firing would be such a tonic for Trinity. There’s absolutely no doubting the 25-year-old’s quality, but he’s been plagued by injuries, and after suffering knee problems in previous years, a damaged elbow limited him to 14 outings (nine tries) this time. Hopefully he’ll be pushing to add to his one England appearance (in which he scored a hat-trick) in next year’s World Cup.

5: Wakefield won’t seem the same without Danny Kirmond. He might have been given his break by local rivals Featherstone, then played for Huddersfield, but the second rower has been a familiar face on the Trinity scene since the 2012 season. The 35-year-old former England international has been influential off the pitch as well as on it, and Trinity fans will wish him well as he moves to York,

Finishing position
Wakefield ended up second-bottom after posting only five wins from 19 Super League matches. They were one of the worst-hit by Covid, regularly being forced to stand players down (in Jay Pitts’ case, three separate spells, even though he never tested positive). But even allowing for that, there were some poor performances, and coach Chris Chester has admitted there were question marks against the attitude of some players at some points of a testing season.

Best result
Pre-lockdown, and an 18-8 home victory over Warrington, which took the edge off Gareth Widdop’s Wolves debut. Post-lockdown, a 30-6 success against Leeds at St Helens. After claims in one newspaper of a dressing-room revolt, it was Trinity’s third win on the spin.

Worst result
Wakefield found Catalans particularly difficult opponents, and in the first of three meetings, one in the Challenge Cup, they lost 58-0 at St Helens. Trinity were missing key men, but lacked energy and enthusiasm. “We’ve got to be tougher, we made it easy for them,” bemoaned Chester.

Best player
Kelepi Tanginoa arrived from Manly in May 2019 and has proved to be a terrific signing by Trinity. The fine form of the versatile Aussie forward, who has also played for Parramatta and North Queensland, was reflected by his selection in the second row of the Dream Team. With plenty of suitors circling, the recent extension of his contract until 2024 was a smart bit of business.

Best young player
While the likes of halfback Connor Bailey and hooker Harry Bowes both made Wakefield debuts and centre Jack Croft added to his four outings in 2019, loan winger Innes Senior was so good that Trinity have signed him twice. The 20-year-old, who emerged alongside twin brother Louis at Huddersfield, will spend the entire 2021 campaign at the Mobile Rocket Stadium after four tries in eight games.

Best overseas player
Classy and consistent Kelepi Tanginoa, who featured in all 21 Wakefield matches, is the clear choice. But his fellow forward, New Zealand-born Cook Islands international and former Sydney Roosters and Cronulla player Tinirau Arona, showed his value to the team, and his recovery from a nasty knee injury sustained in May 2019, with his contribution over the course of twelve matches in 2020.

Try of the year
Reece Lyne scored a scorcher as his side beat Hull KR 48-18 at the Mobile Rocket Stadium on October 25 to post back-to-back wins for the first time in 2020. The first of the acting captain’s brace came when he finished off a spectacular move that contained eight passes.

Quote of the year
“It kind of galvanised us. I knew those comments hadn’t come from within the dressing room. I couldn’t be more proud of how we’ve stuck together and they got the reward tonight. It showed a team that had pride in the badge and pride in the coach,” said defiant Chester after Trinity responded to that dressing-room revolt claim by beating Huddersfield 18-14 for a first win in eleven games.

Image of the year
Winger Ben Jones-Bishop’s beaming smile after completing a hat-trick in Trinity’s biggest win of the season, 48-18 at home to Hull KR in October. It was the 32-year-old’s sixth game back after returning to action following a worrying case of blood clotting on the lungs, which had prevented him taking part in pre-season training and which it was feared might end his career.

Defining moment
Last month’s announcement that planning permission is being sought for a new stand, behind-the-posts terrace, 4G pitch and floodlight upgrade. Wakefield know their future direction hangs on having a stadium fit for the 21st Century, whether it’s a new build or redevelopment of their current historic home, and that the clock is ticking.