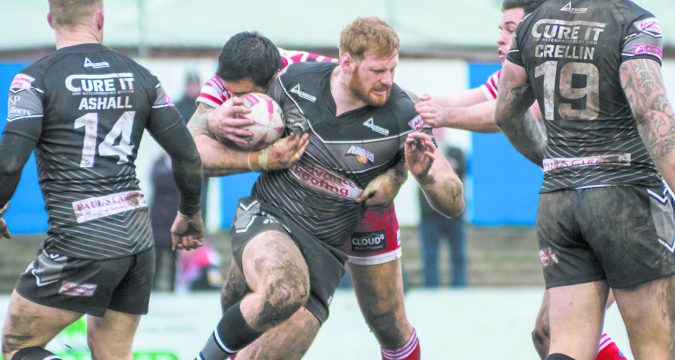 WHAT an outstanding weekend it was last week for Rugby League outside the top flight!
From Barrow Raiders’ stirring win over Championship title favourites Leigh, to 4,221 watching a thrilling League One clash between York and Bradford, there was much to admire in the two competitions.
Barrow’s result means that the promoted club has now taken three points from full-time duo Toronto and Leigh in consecutive weekends. It’s a fine achievement by Paul Crarey’s squad.
The crowd at Craven Park was encouraging too, with 1,991 in attendance to witness Shane Toal score a decisive hat-trick.
When the Raiders were handed an opening trio of fixtures that read London, Toronto and Leigh, few will have given them any chance of securing a single point. So to have secured three bodes well for they ability to compete regularly in the Championship.
Top of the tree after four rounds are London Broncos, who blitzed much-fancied Featherstone in the first half and ended up 44-24 winners.
That’s three wins from three under rookie coach Danny Ward, rubbishing some pre-season predictions about their ability to make the Qualifiers again this year.
It’s also worth noting the presence of seven homegrown players in their side on Sunday.
The Broncos’ home match with Toronto this Sunday should be an absolute cracker.
The Wolfpack edged an entertaining contest at Halifax, winning 20-6 in front of 2,036 at the Shay.
That match was televised, as usual, on Premier Sports, and meant that despite there being no Super League on Sunday fans actually had a choice of live Rugby League to tune into, with Bradford streaming their trip to York online via Proper Sport.
That provided another notable element to a day of significant success at Bootham Crescent, where York’s superb pre-match marketing was richly rewarded with a bumper attendance that would shame some Super League clubs.
It isn’t the first time the Knights have achieved such notable success. They did the same against Toronto last year and pulled in 2,601.
Working on a League One budget, it shows the value of cost effective, positive and focused marketing that creates an attractive event out of matches.
Some clubs at any level could certainly take a leaf out of their book.
It’s just one case of the excellent work that goes on at clubs in the Championship and League One, and there are examples everywhere throughout the course of the season.
So enjoy this weekend’s games. You are unlikely to be disappointed.

Full reports from all the Championship and Challenge Cup ties involving League 1 clubs will feature in Monday’s edition of League Express, which will be available online and in all good newsagents.