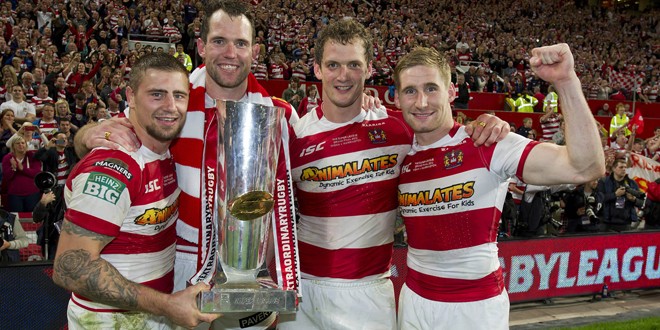 Grand Final week can only mean one thing – all of our regular weekly features turn into Grand Final-related ones!

For this week’s Six of the Best, we’ve been asking all week for the Old Trafford moments that stand out in your mind, and there are certainly plenty to choose from!

We’ve had nominations from as recent as last year, and as distant as 1998, in the very first Super League Grand Final. So, without further ado, here are the six moments you selected as the most iconic of all!

Jason Robinson’s try in the inaugural Super League Grand Final
We start with one of the most memorable moments from the first ever Grand Final, all the way back in 1998. Wigan were trailing Leeds 4-0 at the time, after Richie Blackmore scored the first ever Grand Final try. However, a moment of magic from “Billy Whizz” turned the game on its head, as Jason Robinson danced his way through the Leeds defence to send one half of Old Trafford delirious!

Was it a knock-on or not?
A year on from that Jason Robinson try, Bradford and St Helens met in the 1999 Grand Final – with a controversial moment having a potentially huge say in the outcome of the match. Bradford shifted the ball wide, and when Leon Pryce raced away late on in the game, Bradford fans were delirious. However, referee Stuart Cummins had already pulled the play back for a knock-on against Michael Withers. Replays showed a fingertip touch from Withers – but what did you think?

The drama of the 2002 Grand Final
Our next moment features another of Saturday’s Grand Finalists, this time looking at 2002 champions St Helens. They defeated Bradford 19-18 in an incredibly enthralling Old Trafford showdown – but it wasn’t without late drama! Sean Long slotted a last gasp drop-goal to nudge the Saints into the lead, before Chris Joynt was involved in a moment of drama right at the end of the game, taking what many believed to be a voluntary tackle to try and see the game out.

Blake Green playing through the pain barrier in 2013
Now back to last year, and Wigan’s victory against Warrington in the 2013 Super League Grand Final. Blake Green picked up the Harry Sunderland Trophy for an incredible performance – after suffering a nasty injury in the opening minutes of the match. Green played on with virtually one eye closed, after a facial injury left his face severely swollen.

Rob Burrow’s incredible solo try in 2011
The 2011 Super League Grand Final has been dubbed the “Rob Burrow show” by some, and this incredible try goes some way to proving that! Picking the ball up on halfway, Burrow danced and jinked his way through the St Helens defence to score one of the great Old Trafford tries.

Kevin Sinfield picks himself up from the canvas in 2012
Another iconic moment involving Leeds Rhinos now, and their inspirational captain, Kevin Sinfield. 12 months earlier, Sinfield had delivered a rousing acceptance speech after helping Leeds to victory, and 12 months later, he was at it again. Sinfield was knocked out midway through the second half, but instead of going off, he picked himself up and inspired Leeds to an incredible victory. It contributed to him earning our Golden Boot award in 2012, too.