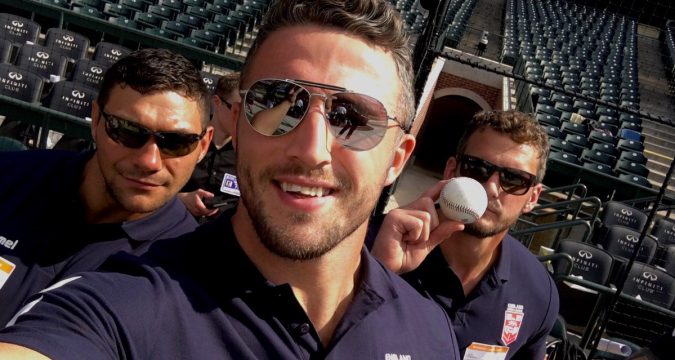 Sam Burgess has set his sights on a career in baseball after getting in the nets with the Colorado Rockies.

Slammin’ Sam and the rest of the England squad got a chance to pick up the bat and hit some home runs as they mingled with the MLB side ahead of their Test match in Denver against New Zealand.

Burgess impressed in his outing, hitting a number of eye-catching shots.

But any hopes of a change of sport were quickly dashed after the Rockies coach told him he shouldn’t expect a contract anytime soon.

“I did hit a few clean ones so I asked if he had a contract ready,” he said.

“But he said I don’t think so. But I was happy with my performance in the nets.

“It was good fun. It was pretty exciting really. I got a thrill from hitting the ball and I struck a few pretty well. All the Colorado Rockies boys are friendly, they thought we were all pretty big guys and wanted to know about the sport.”

Wayne Bennett’s side has been out and about during their trip to the States, and Burgess is confident it will help attract more fans to the game on Saturday.

“Hopefully some fans from today’s baseball come on Saturday,” he said.

“That’s the aim, to get people to watch Rugby League, but we’re going to have some fun on the way and today has been that.”