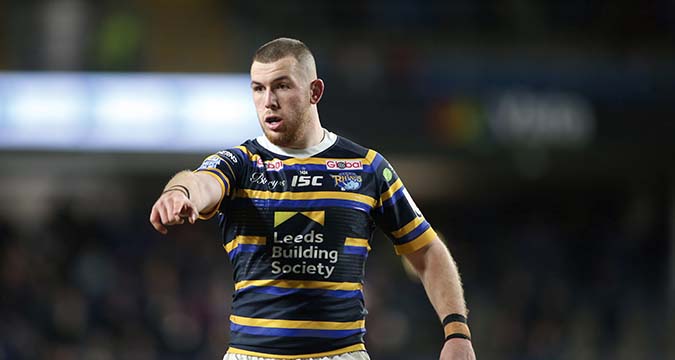 Eager Cameron Smith (pictured) will be hoping RFL disciplinary chiefs go easy on his team-mate Zane Tetevano as he aims to do his bit to help Leeds take a prized scalp on Thursday.

The Rhinos return to Super League duty after their Challenge Cup exit at St Helens, where loose-forward Tetevano was sent off for a late hit on Theo Fages, by hosting last season’s beaten Grand Finalists Wigan in front of the Sky Sports cameras.

The visit of Adrian Lam’s Warriors comes hot on the heels of the 26-18 Cup third-round defeat at defending league champions St Helens, where prop Smith was pressed into emergency service as a halfback because of the Rhinos’ injury crisis.

It’s also the third round of Super League, and after beating Wakefield in their opening game, Richard Agar’s side are aiming to bounce back from an 18-10 Easter defeat by Castleford.

New Zealand star Tetevano, 30, is acclimatising to life in the UK after signing from Penrith Panthers on a three-year deal.

There’s no doubting the quality of a player who made 122 NRL appearances, featuring in 2018 and 2020 Grand Finals for Sydney Roosters and Penrith respectively, and was part of the New Zealand squad that beat Great Britain in 2019.

Tetevano has also played for Cook Islands, and Smith is keen to learn from his new team-mate.

“He’s very experienced, he has played plenty of NRL and international games and he has been really good for us so far,” said the 22-year-old England Knights player, who went head to head with his elder brother Daniel when Leeds faces Castleford.

“Zane has a big presence and it’s impressive the way he goes about training. It is incredible to watch him and learn from him.

“Hopefully he will complement my game with how hard he carries the ball and he can also play a bit. I am excited to be able to work with him.”

Leeds Academy product Smith, who made his first-team debut in 2016, played 15 times last season, including in the Challenge Cup Final win over Salford at Wembley.

“I didn’t get as much as I wanted to out of last year; I broke my jaw halfway through the year and didn’t really kick on after that,” he explained.

“Hopefully you will see a bit more from me this time, especially with the ball.”