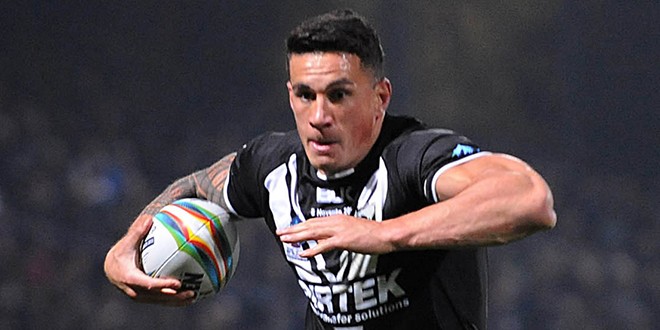 As part of his visit to Lebanon as a UNICEF ambassador, rugby superstar Sonny Bill Williams attended a training session at the Charles Hostler Center at the American University of Beirut, home of the AUB rugby league side.

SBW arrived in Lebanon to visit refugee camps in the Bekaa Valley, principally to raise awareness of the Syrian children and their families there escaping the war-torn country.

Through a Twitter campaign organised by AUB RL, the players were able to communicate with Williams and invite him to the training session that took place yesterday, also thanks to a contact at UNICEF who is an AUB alumni.

The evening started with a Q & A followed by a jersey presentation to Williams by Sol Mokdad, now one of the AUB assistant coaches but who had endeavoured to get rugby league set up in UAE.

Australian Ambassador to Lebanon, His Excellency Mr. Glenn Miles, who welcomed SBW to Lebanon, also attended the training session which concluded when Williams played a game of touch Rugby League, showing his class as a world champion both on and off the pitch.

SBW’s visit follows that of NRL star Robbie Farah’s to AUB a few weeks ago.