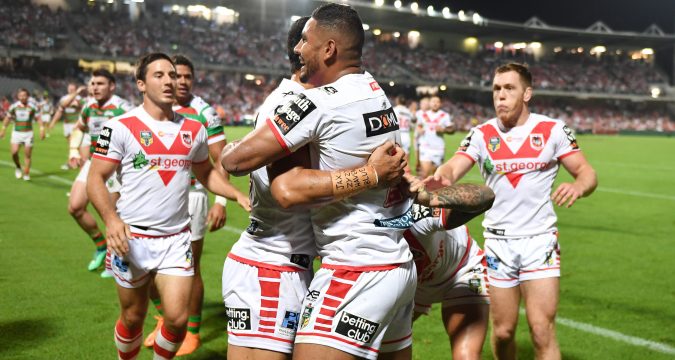 St George Illawarra Dragons beat Melbourne Storm 34-14 to maintain their position at the top of the NRL ladder.

The Dragons were the stronger side early on. After a Gareth Widdop penalty had given them the lead, Euan Aitken went in for the first try after good work from Cameron McIness and Ben Hunt.

A set later, Will Chambers intercepted a McInnes pass but was called back for offside allowing Widdop to make the lead ten.

But when the Storm were finally allowed field position, they took their chance. Billy Slater’s cut-out pass found an unmarked Josh Addo-Carr.

After surviving much Storm pressure, the Dragons earned another two points with two minutes left of the first half.

Two minutes into the second half, McInnes stole a try from dummy half when Cameron Smith was left on the floor after the tackle.

Six minutes later, Widdop probed the short side. Tariq Sims found Tim Lafai who dived in well at the corner.

The Storm were far from their best but were back in the game when Munster found Addo-Carr who strolled in for his fourth consecutive double.

Aitken’s second try with 15 to go halted any Storm comeback.

Addo-Carr turned his double into a hat-trick with five minutes left to play after good work from Munster and Justin Olam, on debut for the Storm in the centres.