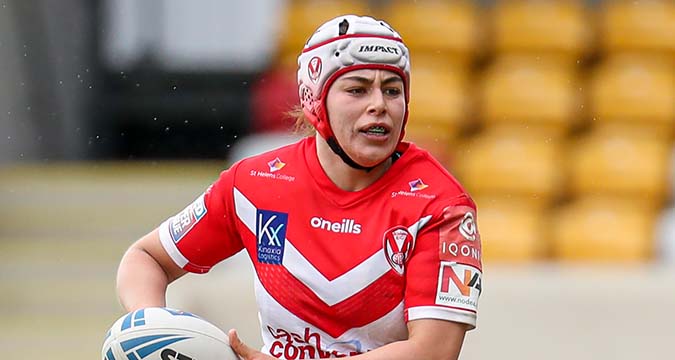 Unbeaten in Super League, a centre partnership that can’t stop scoring, and a Challenge Cup semi-final victory over the team that prevented them from reaching either of the major finals in 2019. It’s hardly surprising that St Helens are heading into Saturday’s Women’s Challenge Cup Final full of confidence.

With the entire season wiped our last year, St Helens have raced into 2021 firing on all cylinders and finally got the better of Leeds Rhinos a fortnight ago to book their place in the showpiece finale at Leigh this Saturday.

“This season as a whole, and the build-up we’ve had to it, just means everything feels different at the club in a really good way,” said England captain Emily Rudge.

“We feel like we’ve had really good preparation and everyone just seems to be in really good form at the minute.

“With the way we have been training and the games we’ve played so far, there is a confidence around the team anyway, but to come up against Leeds in the semis and beat them – that has definitely given us an extra boost.

“We were pleased with the performance of the squad in the semi-final, but we do feel we have another gear to go to. That is something we’re going to build on at the weekend.”

Saints will face a York City Knights side that are now a very different prospect than they were just a few weeks ago.

Smart recruitment from the Yorkshire side has seen them hit some great form in recent weeks and Rudge knows they are not to be underestimated.

“They have got some quality players and it will make for an interesting game,” added Rudge.

“They have signed some great players recently and they’ll really want to turn up and show what they can do.

“The players who have come in from Castleford, that have had that experience of playing in finals before, will definitely be ready for it. But even the other girls, who probably didn’t envisage getting into a final this season, are going to be really excited so we’re expecting them to turn up for it on Saturday.

“At the start of the season people probably thought York would be a long shot for making a final this year, but their new signings have strengthened their squad so we can’t be complacent and underestimate them.

“They beat Castleford to get to the final so they can be a tough team and we’re looking forward to coming us against them.”