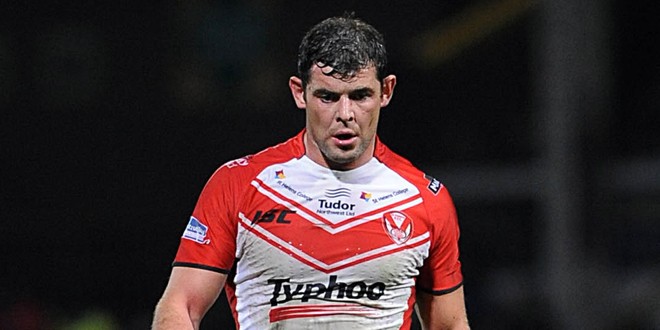 He has played 495 times for the Saints, scoring 1,005 points and collected a whole host of personal accolades.

In 2007 and 2008, he also took home the Lance Todd trophy in Saints’ Wembley successes over Catalans and Hull FC respectively.

“I’ve had an ongoing hip problem for around 12 months and tried my hardest to battle on through,” he said. “I had injections last year to get through it – which was more than worth its while when you consider what we achieved – but in the early stages of this year I started to struggle with it again and that culminated with me leaving the field at Wigan on Good Friday.

“I knew something was substantially wrong there and I want the fans to know I have exhausted every angle possible in trying to find a way to get fit and playing. I still feel I can offer a lot to the club if my body would allow me to but sadly I can’t.

“It is the nature of the sport; I made my debut at 18 and played until 35 so in the grand scheme of things I can’t grumble.

“I will now have substantial surgery on my hip as it is having an effect on my quality of life. Small things like being able to kick a football around with my son, I can’t do that so I have to get it right and focus on the next stage of my life.”

He continued: “I’ve had a great career and I’m proud of my durability and longevity. I have had some luck with injuries but I’ve also had a really good record with the amount of games I have played. It’s frustrating as I am used to playing but I have not been able to do that.

“I have a great relationship with Eamonn McManus, Mike Rush and Keiron Cunningham. They have been patient with me through this and I am looking forward to further working with them.

“I’ve had a really good career and last season was a real highlight. I have met some great people, had great experiences and been in an environment which challenges me. I have played in a great town with great people.

“I’d like to thank my family who have been a huge support to me and in particular my parents who have been a constant source of support and my wife Rachel. When you go through tough times like this, or go on tour, she bears the brunt of it and looks after our kids. A lot of people make sacrifices to do what I do.

“I’d like to thank my teammates who have made my career very special. Win, lose or draw the people you meet, the people you play with make it special and they are friends for life.

“Finally, I’d like to thank the supporters as without them we wouldn’t have a club. They have been phenomenal with me. In my career I have always done my best and I think the St Helens people appreciate that.

“They don’t mind losing providing we try our best and I have always been very mindful of that when I pull on the Red V.”