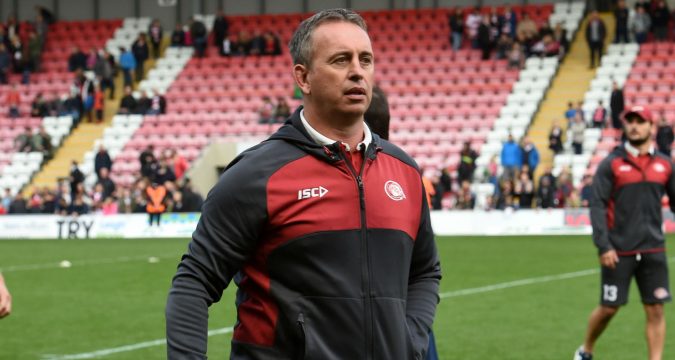 Steve McNamara has refused to speculate on Catalans’ reported interest in Sam Tomkins.

The Dragons have been linked with a shock move for the Wigan Warriors fullback, who McNamara worked with during his time as England head coach.

Tomkins signed a four-year deal with the Warriors that is due to expire in 2019, although it’s emerged that the contract includes an option in Wigan’s favour for the fourth and final year.

As a result, Tomkins could be a free agent at the end of the season, making him free to speak to other clubs in May.

Catalans are believed to be very interested in signing the 29-year-old, however McNamara was coy on any potential interest.

“We’ll always look to add quality players to our group,” he told TotalRL.

“I’m not saying that’s Sam whatsoever, but over a period of time we’ve brought Michael McIlorum and David Mead who have been two of our high profile signings and we’re continually looking at the market and seeing how we can improve our group. It’s not about one particular player right now.

“We as a club understand lots of improvements we need to make within our own organisation with our existing players and we’re working extremely hard to do that.”

When asked specifically if Tomkins was a player that had been mentioned, he responded by saying: “There are lots of players who are coming off contract at the end of the year and a lot of players have been mentioned. You can probably speak to any coach around the game and there’s potential talk and movement surrounding certain players. It’s not something I’m prepared to speak about right now, not one particular player.”

Coincidentally, Tomkins is due to play against Catalans this weekend as Wigan travel to Perpignan.