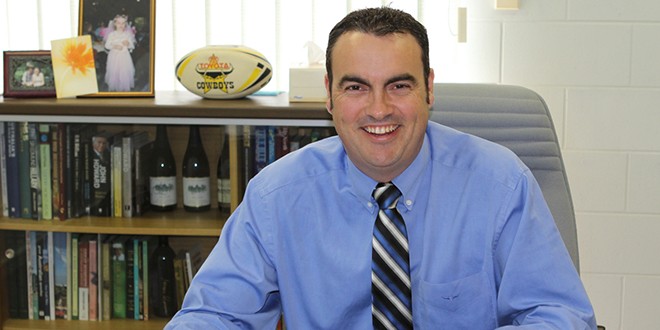 One of the most prolific users of Facebook among my past and present media mates is a fellow that many Rugby League fans in Old Blighty will know … Jason Costigan.

But then again, you should expect that behaviour from a former rapid-fire television commentator who has metamorphosed into a politician. Have you ever met a pollie who was lost for words?

Costigan was first known in Britain during the late 1990s as media manager for the Bradford Bulls and a Rugby League commentator on local radio. If I recall correctly he was on the same programme that used me for a weekly round-up of the NRL. Thunder from Down Under was the name given to my three-minute spot on Sunday afternoon. Cringe, cringe!

Our Facebook mate was later the media man with the Canterbury Bulldogs and for several years would fly across the Tasman from North Queensland to call the Warriors’ home games for New Zealand’s Sky Television Network.

But these days Costigan is an MP in the Queensland State Parliament. He is the Liberal National Party (conservative) representative for the famous Whitsunday holiday destination.

And, each and every day, he blogs about what good deeds he is doing for his constituents.

In recent weeks he’s been doing a sweep through his electorate to take on board all the locals’ worries. And some of the towns and villages in which he has stopped sound very intriguing indeed.

“Of course, they are real,” an indignant Costigan replied to my suggestion that they must be fictional.

“You have to remember this is North Queensland.”

But this week Costo took time off to reminisce about some wonderful old League locations in the north of England. Watersheddings. Knowsley Road. Fartown. The Willows. Thrum Hall. Gone from the sports pages but not forgotten.

It is sad. But fans are wanting more these days than just a ground with a wonderful heritage. They are want stands that provide a semblance of comfort. Otherwise they stay at home and watch the matches on the television.

By the way, Costigan never used binoculars to call a game.

“You only use binoculars to spot crocs [crocodiles] in estuaries,” was his reasoning. Boom, boom!
So much for digressing …

Down Under, we are having trouble just working out the names of our Rugby League stadiums. The home ground of Cronulla is a typical example. It was originally called Endeavour Field, named after the ship sailed by Captain James Cook, who landed in Botany Bay, a couple of kilometres away, in 1770 and claimed Australia for Britain.

Commercial interests have seen it change names to Ronson Field (after an electric razor manufacturer), Caltex Field (an oil company) and Toyota Stadium (a car manufacturer). And occasionally it has been just Shark Park, when there was no major sponsor willing to cough up the cash for naming rights.

Late last year it became Remondis Stadium. Remondis? I’m told it is a waste management company, but none of the Sharks fans I questioned has the slightest idea, which seems to defeat the whole purpose of the sponsorship.

There will be a couple of other new names for 2014. The Eels home ground, known as Parramatta Stadium since it was opened in 1986, has suddenly become Pirtek Stadium. Pirtek describes itself as a manufacturer of fluid transfer systems. I think that means hoses.

They were they sponsors of Parramatta, but baulked when the Eels demanded more money. Instead they bought the rights to the stadium.

GIO, a major insurance company, will also make an entrance next season with its name on Canberra Stadium, which was once Bruce Stadium. Everyone thought Bruce was a New Zealand Christian name, but it was actually the suburb of the national capital in which the arena was located.

And as far as this writer is concerned, I will never get used to the name Suncorp Stadium.
It will always be Lang Park to me. After all, Wally Lewis, whose statue stands proudly outside, is ‘The Emperor of Lang Park’ not ‘The Emperor of Suncorp’.

And a couple of brief footnotes:
On Saturday at Sydney’s Randwick Racecourse a three-year-old racehorse called Koroibete was an impressive winner, his third in six starts, taking his total prize money to around $200,000. He is being aimed at the Australian Derby in our autumn.

Of course, it is named after the Fijian World Cup winger Marika Koroibete. After all, two of his Wests Tigers’ international team-mates, centre Chris Lawrence and hooker Robbie Farah, are among his owners.

And on a different tack, ‘Jumping’ Gerry Byron, the Aussie prop who had spells with Hunslet and Rochdale Hornets during a short British career, telephoned me in a state of excitement on Friday.
“Did you see the Barmy Army at the cricket in Perth?” he asked.

“One of them was waving a Hunslet Hawks flag. It brought back all the great memories from my time there.”

Someone must know the identity of the Hunslet Barmy Army fan. If you do, tell him he made at least one former Rugby League player nostalgically happy!