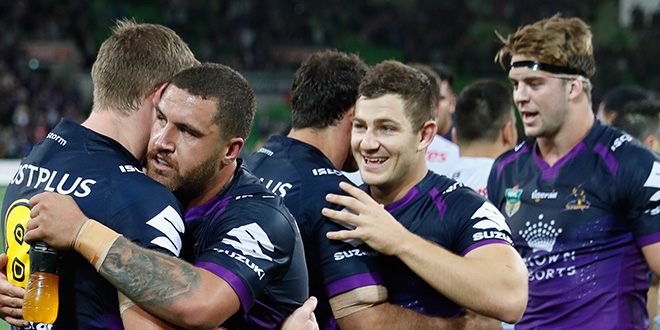 Melbourne Storm were far too strong for Brisbane Broncos today, scoring eight tries to win 12-42 at Suncorp Stadium to maintain their place at the head of the Telstra Premiership.

The Broncos came into the game with Jonus Pearson replacing Corey Oates on the wing, and Alex Glenn starting in the second row with Sam Thaiday on the bench, while Herman Ese’ese dropped off the bench, to be replaced by Joe Ofahengaue.

Melbourne made two changes with Curtis Scott replacing Young Tonumaipea in the centres, while Slade Griffin dropped out of the side with Mark Nicholls coming on to the bench.

The Storm raced out to an early lead with tries to Suliasi Vunivalu, Josh Addo-Carr and Scottin the first 20 minutes, with captain Cameron Smith converting one try to give the Storm a 14-point lead.

The Broncos opened their score with a converted try by Ben Hunt, although Vunivalu’s second secured the Storm a 6-20 lead at half-time.

The gap was narrowed to eight points in the second half when David Mead sneaked over in the corner, with Jordan Kahu adding a fine conversion.

But the Storm replied with four more tries from Scott, Billy Slater, Smith and Addo-Carr to earn yet another convincing victory against the Broncos at Suncorp.