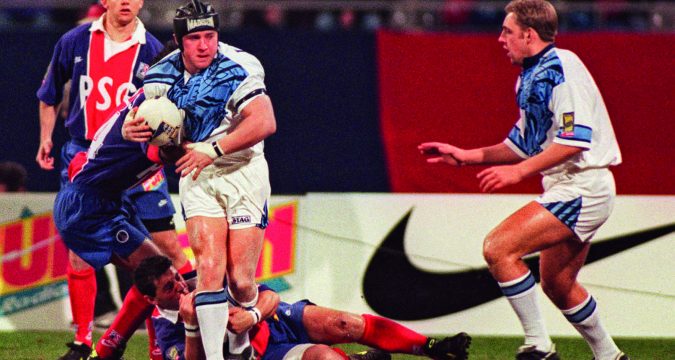 Fifty one weeks after the summer rugby and mergers announcement that rocked British Rugby League to its core, Super League kicked off on Friday 29 March 1996 when Paris St Germain beat Sheffield Eagles.

As Super League’s big kick-off approached, much of the anger had subsided as on-field matters took priority over the arguments and bitterness.

And, most fittingly, given Maurice Lindsay’s big-city vision, Rugby League’s new era would be launched on the banks of the Seine, with Paris St Germain entertaining Sheffield Eagles.

“It was at the time the NFL was trying to expand in Europe, so that seed of expansion was planted in the British sport psyche.

The big day was exactly a quarter of a century ago – Friday 29 March 1996. Woods was among a dozen journalists who turned up to Leeds-Bradford airport in the early hours to catch a flight to the French capital.

“We turned up and the flight had been cancelled,” Woods laughed.

“We needed to be in Paris in a few hours, so we started ringing around. It was planes, trains and automobiles.

“David Oates, my colleague from Five Live, Andrew Varley and I went to East Midlands airport and got the last three seats on a flight to Paris.

“John Whalley, Martin Richards and Paul Fitzpatrick went to London to get the Eurostar. Ten minutes before kick-off, the three most bedraggled men you’ve ever seen came stumbling into the press box looking like they’d been travelling for a fortnight.

“Peter Ward from BBC World Service was based in the Middle East and had flown into Paris. He went for a quick nap in the hotel and woke up the morning after. He’d missed the entire game.”

And what a match he missed! Paris won 30-24 with the official crowd figure standing at 17,873 but, as kick-off approached, there were still only a few thousand in the ground.

“My first instinct was, ‘this is going to be disappointing’,” said Woods. But as the game went on, more and more people turned up.”

The game also saw the introduction of the video-referee and squad numbers, as well as various new rules like the zero-tackle.

“It was fantastic, just what we’d dreamt of,” said Woods.

“It was a great success with the crowd and Paris won. When they scored the clinching try, we went to John Kear on the touchline, and he came up with a great line: “It’s goodnight Vienna for Sheffield in Paris!

“I asked Maurice at the press conference if he’d been concerned about the crowd, and I’ll never forget his answer: ‘Dave, we all know what the Périphérique is like at rush hour on a Friday. They were always going to turn up!’

“I mean, I know what the M62 is like on a Friday, but not the Périphérique!”

But the Paris venture wasn’t successful. The French players had to play two matches per weekend – in the local domestic competition and also for PSG.

Wins were hard to come by. Crowds dipped – in a game against Salford in 1997, the attendance was just 500, which remains the competition’s lowest-ever crowd. The club was wound up after two seasons.

“On the night, people wondered if this what we’d always been waiting for – to make the world sit up and take notice of us,” said Woods.

“But there was also a feeling that everything was built on sand.

“There were a lot of overseas players available to Super League, but the British clubs got the best of them, and Paris were left with the rest, which was typical of the selfishness and short-sightedness that we still see.

“Paris tried their best, but it was never going to be good enough.”

A YEAR OF HIGHS AND LOWS

There have been few more tumultuous years in Rugby League than 1995, although 1996 pushed it close.

The game looked ill-prepared to embrace its new dawn at the turn of the year.

The shortened 1995-96 season was played before low crowds with exhausted players having to slog their way through two matches a week.

With the early rounds of the Challenge Cup to navigate, there was no real break before Super League kicked off.

As ever, the players saved the day, but they were undermined by a governing body whose congenital ability to make bad decisions continued to embarrass the sport.

St Helens were the real beneficiaries as they won a magnificent Wembley final against Bradford Bulls by 40-32.

Wigan earned some plaudits in the national spotlight by thrashing Bath in a two-leg cross-code challenge by an aggregate of 101-50. They also demolished four leading union sides to win the Middlesex Sevens.

The northwest giants were locked in a thrilling Super League title race. In a 22-game season with no play-offs, they beat each other, and both lost at third-placed Bradford Bulls.

The big moment came at Central Park in June when Terry Matterson’s touchline conversion earned London Broncos an 18-all draw and handed the initiative to Saints.

With skipper Bobbie Goulding the season’s stand-out individual, Saints held their nerve, despite a scare in the capital when a late Apollo Perelini try rescued them. They wrapped up the Super League title by demolishing Warrington 66-14 at Knowsley Road at the end of August.

While Bradford, London and Warrington were much improved, standards were questionable elsewhere. Leeds endured a nightmare year and only avoided relegation by finishing ahead of Paris and Workington.

Across the competition, crowds were up by 1,000 per match compared to the previous three seasons, but the competition average stood at a disappointing 6,571.

The international game, sadly, was a mess in 1996, and that undid much of the promising domestic progress.

It started with the mid-season European Championship, in which France, fielding 16 PSG players, were hammered 73-6 by England.

And then, quite staggeringly, the deciding match between Wales and England was scheduled at the same time as the biggest sporting event the UK had hosted in 30 years – soccer’s England v Germany semi-final in Euro 96. Just 5,425 turned up to see England beat Wales 26-12 in Cardiff.

The end-of-season Lions tour was even more shambolic.

Unable to play Australia because of the ongoing Super League War down under, the tour was never going to be a money spinner.

The first Test against the Kiwis saw a heartbreaking late defeat in front of just 7,200 fans at the Ericsson Stadium in Auckland.

And then: a bombshell. The RFL announced they were sending home twelve players in order to save some cash. There were still two Tests to play.

With morale on the floor, the Lions succumbed to a series whitewash.

It was a public-relations humiliation for the sport and one of Maurice Lindsay’s biggest mistakes. It was sad way to end a momentous year for Rugby League.