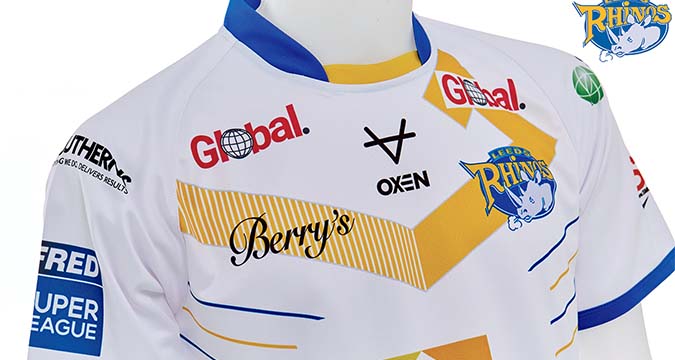 Super League clubs like to change their look on a regular basis. They’re often changing even the colours of their shirts and moving away from tradition to spice up their look, which is an alien concept in a lot of other sports.

Here we take a look at all the teams and how they will line up in 2021 with some notable differences from last year.

We’ve given each shirt a rating out of ten, but which shirt do you like the best? You can write to the League Express Mailbag or comment on our Fans Forum! Castleford have gone away from their orange home shirt which they have been sporting since 2015 and instead have gone with a home black shirt with an orange trim, which is unusual for the Tigers.

Their away shirt is perhaps more familiar, featuring the famous amber which they last wore in 2014 as their home shirt.

The Tigers have also released a third kit, not uncommon for the Tigers who regularly wear a different shirt at the Magic Weekend and in the post-season.

The fact that they are so different will no doubt divide opinion. Their home shirt has a familiar feel to it, with the classic white accompanied by an orange or red V.

Both the away and cup shirt have the same design, but the colours differ.

The away shirt certainly looks classically Catalans while the Cup shirt provides a little diversity, but the colour is perhaps a little dull compared to the home shirt or the vivid red of the away strip. The Giants’ home shirt is very recognisable, although it differs from the most recent Huddersfield shirt.

With the transition to the gold underneath, it might have been nice to have gold shorts as well rather than claret.

The away shirt features an interesting choice of colours that are not instantly recognisable as the Giants, although the familiar ‘Bond It’ sponsor does make one think of Huddersfield, which is the bonus of having a loyal sponsor. The shirt, featuring the classic black and white hoops, which were worn by Whiteley in the 1950s and 60s, has a special badge which shows Whiteley’s heritage number and JW90, which is a reference to his milestone birthday.

Meanwhile, the away shirt sports a clear blue colour reminding us, intentionally or otherwise, of the club’s days as Hull Sharks. But the black and white V makes sure we recognise the team’s true identity.

The away shirt is fine, but the home one steals the show and is one of the best in Super League this year. This isn’t the classic Hull KR look of white with a red hoop. Instead, they have decided to change it and go for an all-red shirt and white chevron.

The big decision has been to run without a main sponsor on the front, which is a popular choice these days spearheaded by football teams in this country.

However, it is likely that something will appear on the front of their shirt with conversations ongoing. Although fans will perhaps look to buy early and secure a shirt without a sponsor.

The club is also using an away shirt and a charity shirt in support of the mental health charity ‘Mind’. 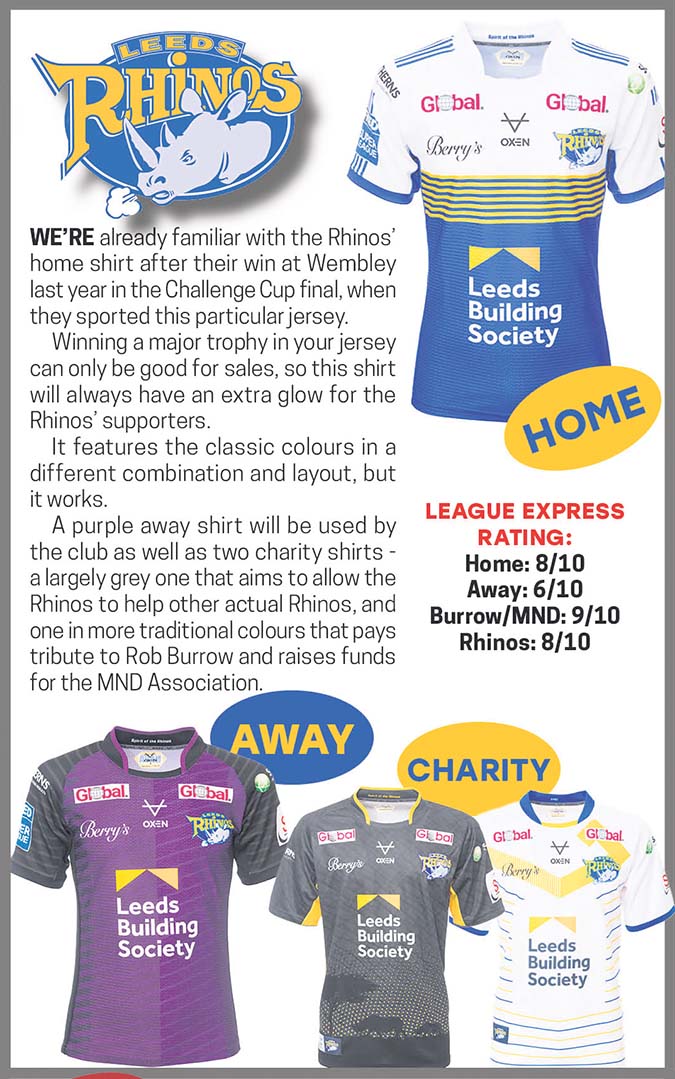 We’re already familiar with the Rhinos’ home shirt after their win at Wembley last year in the Challenge Cup final, when they sported this particular jersey.

Winning a major trophy in your jersey can only be good for sales, so this shirt will always have an extra glow for the Rhinos’ supporters.

It features the classic colours in a different combination and layout, but it works.

A purple away shirt will be used by the club as well as a charity shirt that aims to allow the Rhinos to help other actual Rhinos. The new kids on the block went through a brilliant public selection process to decide on their kits for 2021.

The vast majority of the options available were good and so they have ended up with a nice selection as they re-join Super League after three years away from the top flight.

The home jersey is a very recognisable red and white hooped model, while the away shirt features the same design but with the colours of gold and black instead, providing a nice contrast to the home shirt. Salford Red Devils’ home shirt provides them with a fresh look as they head into a post-Ian Watson world.

The team will have a new feel to it, both in terms of personnel and in terms of their shirt, with a white and black strip down the middle of the home kit.

The black and white are also repeated on the sleeves.

The club’s away shirt is set to be released soon. Keep your eye out for the big reveal! The Saints have stuck with tradition. How could they not? They have a classic white shirt with a red V. Although the V does have some flourishes to it, with a plunging point and some fading on the shoulders. The red trim helps this shirt look smart and the players will look the part at the Totally Wicked Stadium.

On their travels, St Helens have kept it fairly simple with a dark blue shirt with some added red spots higher up the shirt. Wakefield have gone with a slightly different look this year with a darker colour of blue used on their home shirt but a familiar design with the single hoop in the middle surrounded by two smaller ones in white and red. Trinity will look smart in their home jersey at the Mobile Rocket Stadium and the overall effect reminds us suitably of Wakefield.

Their away shirt, meanwhile, isn’t unlike some of their past home shirts. The colour can be described as milky and the V is a classic Rugby League idea. Seeing Greg Inglis holding your club’s shirt aloft must add a little something to it.

Quite often, the club head further towards the blue colour rather than primrose but in this kit, the yellow colour is more prominent with the blue hoops slightly smaller. So this kit is a little different for the Wolves. You’ll certainly be able to spot them on the pitch, that’s for sure.

Their away kit is quite familiar with the green and red used before by Warrington in their away colours and in our view it trumps their home shirt. With a new rebrand occurring just before the end of last season, Wigan’s kit has a new feel to it.

The red is now much darker and instead of going for the familiar white hoops, the small hoops are in a black colour. The famous old cherry and white will not feature this season.

It could take a while to get used to Wigan playing in the darker red.

Their away kit is quite often blue and we see that colour again here but also, perhaps, slightly darker than usual.