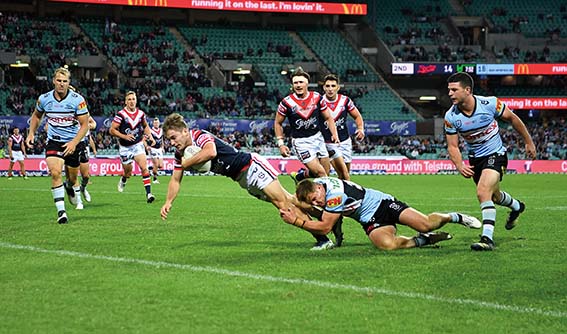 Wakefield Trinity coach Chris Chester expects Super League to follow the NRL’s new directives on contact with the head – but says the sport in this country must focus on aligning its own rules before worrying about Australia’s constant changes.

The NRL has seen a flood of sin bins and dismissals over recent rounds after referees were instructed to punish high shots.

Chester believes this country will take a similar approach after the next RFL Laws Committee meeting – on which he is the Super League coaching representative – as the sport looks to minimise the dangers of contact with the head.

But he also believes Rugby League in this country can be too quick to follow the NRL, regardless of its decisions, and sees playing under the same rules in Super League and the Championship as more important.

“I think we’ll find it happen over here,” Chester said of the head-contact directive.

“At the next Laws Committee meeting the head knocks will get brought forward – there’s been a massive clamp down, hasn’t there.

“We are at times a bit reactive to what goes on over there, but the head one is something we need to take seriously.

“I’ll go back a couple of years where we had a guy wanting two referees in the game and we were so close to that happening.

“Then all of a sudden the NRL get rid of the two referees and go to one and it stops.

“We need to take stock of what’s happening in our own game before we make some big calls like that.

“I get why we do it and we want to align all the rules with the NRL, but it’s not necessarily always the best way for Super League moving forward.”

Another change in the ball-strip rule has seen a host of contentious decisions, including the one that led to Wakefield’s recent golden point defeat at Leeds.

Chester last week spoke to referees’ boss Steve Ganson, who confirmed that in that instance the decision was wrong.

“I was never a fan of the strip rule and I think it makes the game look ugly,” Chester said.

“You will get more and more of those decisions like the one we had last weekend.

“When we’ve got promotion and relegation you’ve got to get those decisions right and we’ve made it harder for those referees in terms of bringing all these rules in at once.

“The game has got ridiculously quick, and there’s a lot of inconsistencies with the interpretations of six again from one to another.

“It’s challenging and then you’ve got 80 seconds to kick a ball over the posts and players are getting fined at 82 seconds and 87 seconds.

“The game is quick enough. Surely we can give a goalkicker an extra five seconds to make sure he’s accurate.

“That’s something we need to look at as well – the fines for infringements like that.

“The game is now quick enough – we don’t need to quicken up players taking a goal kick.

“There are some rules we need to have a really good look at and some that are really good for the game.”

Also on the laws committee agenda next month will be whether or not to bring scrums back into the game, which that Chester hopes will happen as quickly as possible.

He added: “The last time we were in a Laws Committee, Graham Annesley came in and let us know what the new rules would be and what the challenges would be.

“We’ve still not got scrums over here, but they are a fabric of our game.

“As a game we do want to align ourselves with the NRL, but we have to align the Championship with Super League.

“I don’t know a sport where you have different rules in one competition to the next – look at the Premier League and Championship.

“We have different rules on golden point.

“We have to sort our game out first before we worry about what’s going on over there.”