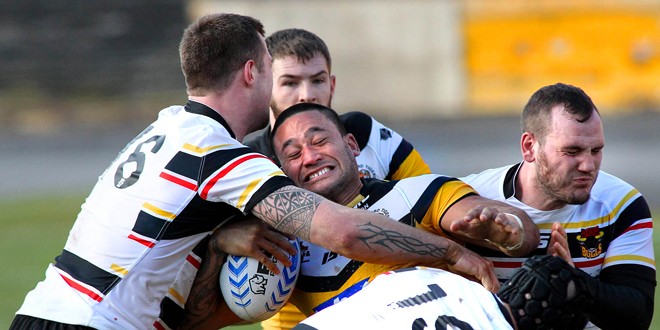 Bradford Bulls scrum-half Luke Gale says the club will learn lessons from their pre-season pummeling by Castleford Tigers as the two-sides go head to head again this weekend in the opening round of Super League.

The Tigers ran out 66-10 winners at The Provident Stadium earlier this month but Gale insists his side will be much better prepared for Sunday’s meeting on the same ground.

“Our minds weren’t on the job that day and if you don’t turn up 100 percent things like that can happen,” said Gale.

“We went from doing everything right against Hull FC the week before to getting nothing right at all.

“But we won’t disregard that game completely as we get ready for Sunday because we’ve looked back at it and taken out the negatives and been working hard on them since.

“We can’t wait to get out there and fix up what went wrong in that game and hopefully we will see the results of the hard work we have done since then when we get out there this weekend.

Coach Francis Cummins agrees with his star half-back and know his side are much better prepared going into the Super League opener.

“We had a lot of bumps and bruises that week and at times there were only about 14 players physically able to train so it was a tough week,” said Cummins.

“We gave Castleford no opposition in the pre-season game but when you look at it we only had four sets of good ball in the frst half and scored twice. That shows that even when we were off our game we still had the quality to score on two out of four occasions.

“This week we need to go out there and defend like we mean it as well as still creating the chances to go up the other end at attack.”

New signing Dale Ferguson is not fit to make his debut after struggling with a back injury. but fullback Brett Kearney if fit to play after missing the Bulls’ pre-season campaign following shoulder surgery. There is no place in the 19 for Jarrod Sammut, meaning Gale and new signing Lee Gaskell will feature together in the halves.

“We took a lot of confidence from that game,” said Castleford winger Kirk Dixon.

“But we know this one is going to be a completely different beast. There’s two points on the line now whereas in the friendly it was getting people fit trying to get some combinations together, I think this week we know that Bradford will be coming out all guns blazing trying to right a few wrongs from that friendly.

“It’s Super League now and we are under no illusions, we know it’s going to be a total different game. We’ve been trying to fix up some things we didn’t do too well in that game and try build on what we did. Hopefully it will be enough to see us come home with the win.”

Castleford are narrow favourites for victory. The best price you can get them at is 10/11 with SkyBet. Bradford are 21/2- with BoylesSports to win, while a draw is 18/1 with Bet365.