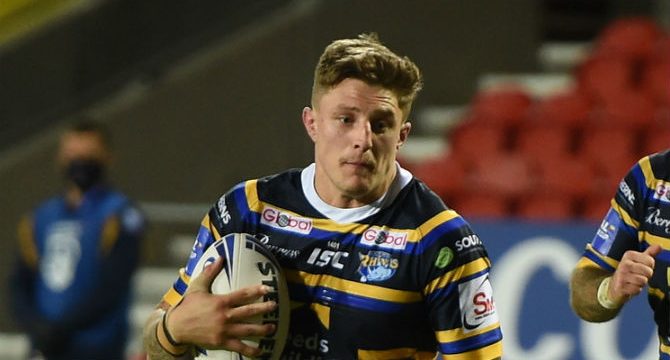 League Express can reveal the 25-year-old has entered negotiations with the club with a view to extending his contract.

Sutcliffe handed in a transfer request in July and Leeds said they would not stand in his way if he could secure a move elsewhere.

However, Leeds coach Richard Agar left the door open for the England international should he change his mind and decide to stay at Headingley.

Since asking to leave, Sutcliffe has produced some of the best rugby of his career, cementing his place at centre after a string of impressive performances in the position.

After playing in the club’s Challenge Cup Final victory at Wembley, his agent, Craig Harrison, confirmed contract talks had commenced.

“He’s absolutely loved playing centre; he feels he’s got a position he can nail there and the club made it clear if he can stay at that level he will play there,” Harrison said.

“If we can make the deal happen, and there’s no reason that it can’t happen as I enjoy working with Kevin (Sinfield), who talks straight and honest, Liam has made it clear to me that he will stay at Leeds.

“We’re probably going to sit down next week and try and bash a deal out that’s right for both the player and club.”

Branded as a utility player, part of Sutcliffe’s reason for wanting to leave was to specialise in one position, having played fullback, centre, stand-off, back-row and loose-forward since his Leeds debut.

His versatility has help him amass 180 appearances for the club and multiple titles, as well as an appearance for England. But he is now determined to establish himself in one position.

The news will delight Leeds fans, who have been vociferous in their calls for Sutcliffe to stay.