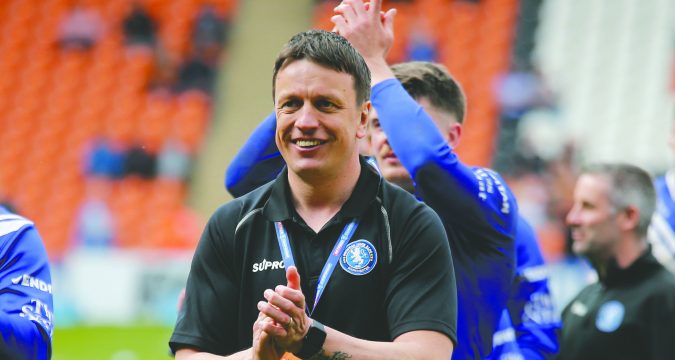 Before heading into hibernation, Swinton Lions had emerged as one of the most exciting and bright clubs outside Super League.

In Stuart Littler’s own words, they had “planted some seeds” within the core of their club, young players were brought in to develop, and the maturation of those seeds into plants was quite remarkable.

2019 saw Swinton secure their best league position in 27 years, and they had their young squad to thank for that.

The standout, of course, was Matty Ashton, who went on to shine on the Super League stage for Warrington last year.

But Ashton was just the latest in the long line of players to start their Rugby League journey with the Lions.

Andy Ackers, Chris Atkin and Chris Hankinson had all trodden the same path before making their way to Super League.

The challenge for Swinton now, upon their return to action, is to discover if those seeds have blossomed further during a year on the sidelines.

“We’re looking to progress on and off the pitch.

“Our recruitment plan was to sign young and we want to be young and sustainable.

“When I first came it was one-year here and one there on contracts. But the issue then is that you’re building a new team every year and we didn’t want that, we all want stability.

“You get some lads who want one-year deals as they’re backing themselves to get new deals here or with other clubs, and that’s fine by us. Other lads who are in their mid-20s, they want to be more settled, get a team tied down for two years and it gives us continuity.

“But it shows we’re doing something right. We’ve had them come here and go straight through to Super League and that’s outstanding for us, as it makes the selling of the club easier.

“We’ve not got a millionaire owner, so we’ve got to build organically and from the bottom upwards.”

That process is underway though. The club has purchased GPS equipment and new software to help the coaching staff review and prepare. But it’s also part of the plan for making the club the most desirable location for aspiring players.

“I need Swinton to be the best environment for these boys,” Littler adds.

“If they believe they are improving here, then it generates more interest. Sure, it might generate interest from other clubs and we might lose some along the way, but hopefully, we can get into a position where we can compete with the top end and keep them in Swinton jerseys.

“Young boys have to have dreams, and if that takes them to Super League so be it; we have to put them in the best position to do that and achieve it with us. There are opportunities here.”

Littler, in his quest to ensure that opportunities are backed up by results, has injected his side with some experience to complement the latest raft of young additions.

Martyn Ridyard, one of the greats at Championship level, and forward Sam Brooks, have both arrived, while Liam Forsyth has also made the move from Leigh.

“We got our recruitment done early. Gavin Bennion and Rob Fairclough decided to go, but we got Martyn Ridyard and Sam Brooks in. Liam Forsyth was a big statement of intent to get him from a full-time environment and he was offered other opportunities, so it was a big coup for us to get him back.”