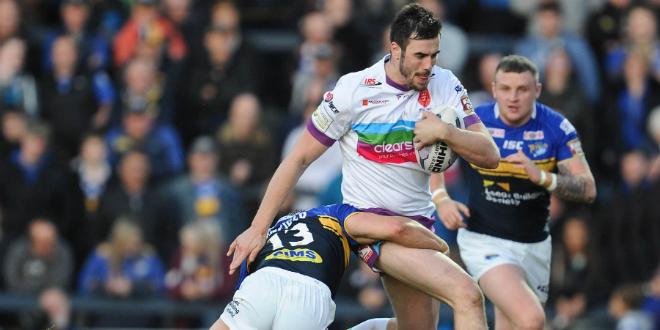 Every year there are some tremendously positive stories that come out of Rugby League.

Many of them are currently featuring in our annual League Express series setting out the 50 most significant and memorable moments of the year.

But unfortunately we sometimes have to deal with stories that are tragic, such as Rob Burrow being diagnosed with motor neurone disease, or Mose Masoe suffering a catastrophic and life-altering injury.

And there is another incredibly sad story that received less publicity than Rob or Mose, but which was just as heartbreaking, if not even more so for his family.

The inquest into his death took place last week at Hull Coroner’s Court.

This is a case that should be pondered by everyone who holds an official position in Rugby League, because it reveals precisely the impact the game can have on the bodies of players who turn out for our entertainment.

From being a young boy, Jordan had wanted to be a professional Rugby League player.

And he achieved his ambition, spending five years in Rovers’ first-team after making his Super League debut in 2011.

In 2016 he left the Robins and went on to play for Huddersfield, Warrington, Sheffield Eagles, York and Doncaster.

He came back to Hull KR in March 2020 to play for the club’s newly formed reserve team.

The problem for him, however, was the growing injury toll on his body.

They first began when, at the age of 19, he had his spleen removed after it ruptured during a game.

He subsequently suffered from broken bones and he had problems with his shoulders and knees, which caused him severe pain, including chronic back pain from his early twenties that several surgeries couldn’t cure.

Trying to ease the pain, he became hooked on tramadol regularly took doses in excess the recommended amount.

The inquest heard there were “toxic levels” of the drugs diazepam, pregabalin and oxycodone in his body. The combined of those drugs caused his heart to stop and he passed away.

The assistant coroner Ian Sprakes said: “The medical cause of death is given as drug poisoning. This is an extremely sad, untimely and tragic death of a young man. Jordan was only 27 years old.

“It is clear to me Jordan had taken his pain relief medication to such an extent that his body simply couldn’t tolerate it, which consequently led to his death.”

It’s a sad and disturbing story, not least because it makes me wonder whether there are many other current players who are overdosing on painkillers to try to manage the pain caused by chronic sporting injuries.

And if some players are doing that, should they be allowed to carry on playing?

In Jordan’s case, his family were helped, I’m glad to say, by the Rugby League Benevolent Fund.

Its manager, Steve Ball, sent me a statement from Jordan’s mother Amanda after the inquest took place.

She is anxious that we don’t just regard Jordan as a statistic, but as a living, breathing human being. I’m glad to print it here.

“I am the proud Mum of Jordan Cox,” says Amanda.

“Thank you for giving me this opportunity of telling you what Jordan was like. I believe that it is very important to this inquest and those reporting it.

“Jordan was gentle, loving, kind and filled our lives with laughter and fun. It didn’t matter if you knew him for 27 years or 27 minutes, if he was your friend you could share in his laughter.

“He loved playing Rugby League and loved life. He did experience a couple of serious injuries and Jordan suffered periodic bouts of acute pain, which became a real problem for him.

“I sincerely believe he was looking forward to his future. His death was an unexplained tragedy and his life was taken too soon.

“As Jordan’s loving family we would like to thank all those that have supported us through these dark days. Jordan’s friends, the whole Rugby League family, my friends and colleagues and the work of the RFL Benevolent Fund. The general public of Hull have been tremendously kind and supportive.

“Your emotional generosity has been a great comfort to us. Thank you!”

The news about Jordan Cox reinforces the decision of former Leeds captain Stevie Ward to announce his retirement last week.

Although Stevie’s problem was caused by concussion, as opposed to the problems that Jordan suffered from, it was obvious that Stevie couldn’t carry on playing Rugby League.

“On a daily basis I struggle with migraines, dizziness, motion sickness, sensitivity to light and screens, short term memory issues, slurred speech and an inability to exercise or do daily tasks without irritating my symptoms,” he explained.

What other decision could he have made?

I hope that he will eventually find medical treatment that will restore him to full health, hopefully sooner rather than later.

And I’m afraid that in a time of pandemic, the sad news keeps on coming.

On Saturday night Leigh Centurions reported the death of Andrew Parkinson, who, aged 35, was the club’s full-time employee and its IT manager.

Most Rugby League fans, other than Leigh supporters, probably wouldn’t know Andrew, and yet I received emails from him regularly giving me various items of news about the club, and if I had some sort of an inquiry about Leigh, or needed help in any way, he would always go out of his way to give it.

Andrew was the brother of David Parkinson, who for many years has been a reporter for League Express.

David, like Andrew, is a Rugby League man to his bootstraps who has his own podcast, but will always go the extra mile to cover a Rugby League game at any level.

I was so sorry to hear this tragic news, which arose when Andrew tested positive for Covid.

I would like to extend my condolences to David and the Parkinson family as a whole, and to the Leigh Centurions, who have lost one of the club’s most dedicated employees, who will surely be very hard to replace.