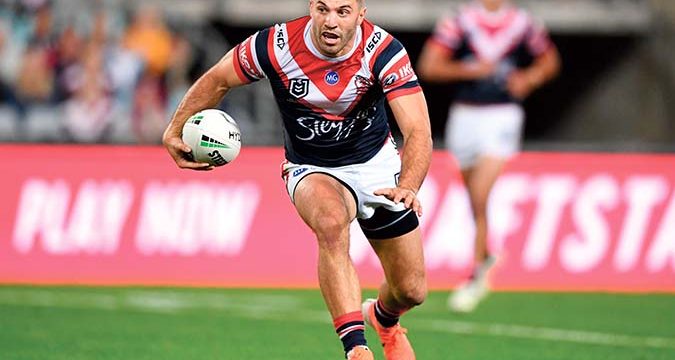 Sydney Roosters were the star performers on day three of the new NRL season, registering a 46-4 victory over Manly Sea Eagles at the Sydney Cricket Ground today, with fullback James Tedesco and veteran winger Brett Morris both scoring hat-tricks.

The Roosters scored three more tries from Sitili Tupouniua, Angus Crichton and Josh Morris, with four goals from Siosiua Taukeiaho and one from Adam Keighran as the Roosters ran riot against the disappointing Sea Eagles, whose four points came from an early try by Reuben Garrick.

Earlier in the day New Zealand Warriors registered a convincing 19-6 victory over the Gold Coast Titans in the Warriors’ temporary home ground in Gosford, on the NSW Central Coast.

The Titans’ only response, in the sweltering conditions, was a try from Corey Thompson on 73 minutes, which was converted by Jamal Fogerty.

The final game of the day saw the Penrith Panthers register a 24-0 victory over North Queensland Cowboys.

The Panthers took an early lead though a Kurt Capewell try on six minutes, and although the Cowboys held them for the rest of the first half, the Panthers ran away with the game in the second half with tries from Dylan Edwards, Brian To’o and Isaah Yeo. Ivan Cleary kicked three goals and a penalty.