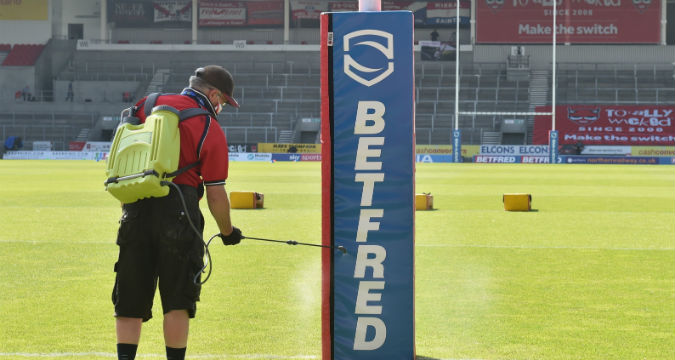 Nobody is pretending that having to deal with the unprecedented challenges the pandemic has posed for Rugby League is easy.

And nobody is saying there isn’t a fair-sized difference, both financially and geographically, between the game in Australia and Europe.

But it’s hard not to compare and contrast, and once again cast an envious glance in the direction of Peter V’landys.

The NRL boss caught the eye last year when he got his competition up and running amid the uncertainty of the initial impact of Covid in Australia.

Now, with the virus again taking its unwelcome hold, particularly in Sydney and surrounding areas, he has implemented a new bold plan.

In a bid to make sure matches continue without interruption, all nine Sydney-based teams, as well as Canberra, Newcastle and New Zealand Warriors — who have been based in the New South Wales coastal town of Terrigal for the last 18 months — will relocate to Queensland.

The twelve teams will set up headquarters across three hubs for a minimum of four weeks.

The matches that should have been played in New South Wales will be switched to either the Suncorp Stadium in Brisbane, Cbus Super Stadium on the Gold Coast or Sunshine Coast Stadium.

“This will be probably be for us the most challenging and sophisticated logistical exercise that we’ve undertaken since – I’m not sure when,” said NRL chief executive Andrew Abdo, who confirmed the arrangements will be extended beyond four weeks if necessary.

Talk about swift and decisive decision making, and then look at this country, where twelve Super League games have been postponed or cancelled and Thursday’s Hull KR v Hull FC derby, which has already been called off once, is hanging in the balance.

Two of the postponed games are due to take place on Friday, but there is yet no news of the others, while all fingers are crossed that Saturday’s Wembley double-header will survive intact.

But if Australia had a Challenge Cup, they would surely have made arrangements to place the two finalists in secure ‘bubbles’ for as long as possible before the big showpiece.

And ponder also Batley coach Craig Lingard’s remarks about clubs below Super League being left in limbo over funding levels for next season and beyond.

“After the sacrifices people have made this year to not only get the season up and running but hopefully to get it to a conclusion, I believe the sport has totally disrespected everyone involved,” he commented.

“RL needs to decide quickly what direction it wants to go so everyone can decide whether it’s worth the sacrifice.”

When a such an experienced and respected figure goes public with such views about the game’s governance, it’s concerning to say the least.